High Elevation Rock Festival, fueled by Monster Energy, returns to Fiddler’s Green Amphitheater presented by Subaru just outside Denver, Colorado, with an extra night of music — Friday night, September 22 and Saturday, September 23. After its one-day debut in 2016, High Elevation comes back bigger and better in 2017 with a lineup of more than two dozen bands, led by Korn, Five Finger Death Punch, A Day To Remember, Stone Sour, Halestorm and more. 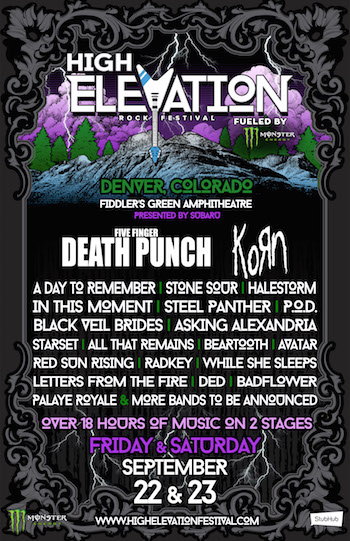 The full lineup for High Elevation is as follows: Korn, Five Finger Death Punch, A Day To Remember, Stone Sour, Halestorm, In This Moment, Steel Panther, Black Veil Brides, Asking Alexandria, Starset, P.O.D., All That Remains, Beartooth, Avatar, Red Sun Rising, Radkey, While She Sleeps, Letters From The Fire, DED, Palaye Royale, Badflower and more bands to be announced in the coming weeks.

“After an incredible inaugural event last year, we decided to turn it up a notch in 2017 and expand High Elevation to two days,” comments Joe Litvag, Executive Producer of the festival for AEG Presents. “Now we’ve got 25 of the very best-in-class artists like Korn, Five Finger Death Punch, and Black Veil Brides performing more than 18 hours of music for the hard rock fans of the Rocky Mountain region to celebrate!”

New to the 2017 festival is an exclusive VIP experience in Marjorie Park, on the North side of the amphitheater. Amenities in this lounge include shade, seating areas, premium food and beverage for purchase, and private restrooms. Marjorie Park VIP passes will be included with certain ticket packages and available while supplies last as an upgrade on all ticket types.

All tickets for High Elevation Rock Festival include admission for both Friday night and Saturday. Ticket prices are as follows:

High Elevation two-person (Silver) and four-person (Gold) hotel packages will also be available. All hotel packages include accommodations for Friday and Saturday nights, Friday and Saturday admission to the festival, access to the Marjorie Park VIP area, Premier Parking, and a $25 merchandise voucher which each ticket. For more details, visit www.HighElevationFestival.com.

High Elevation is proud to be fueled by Monster Energy.