“We came here to play tonight, but we also came to fuck shit up!” Danzig shouted, proclaiming the mission statement of The Original Misfits. On that Saturday night, they absolutely destroyed the crowd of over 20,000 screaming Angelenos at the Banc of California Stadium. The performance was part of a reunion many thought impossible, but the band has officially set aside 33 years of bad blood. Since 2016, the horror punk legends have consistently added one-off shows in various metropolitan areas.

Darkness descended as the sun set and all the lights dimmed. Haunting sounds of horror blared through the speakers and signaled the audience that the headliners would soon begin. The intro track ended with a monstrous voice bellowing, “I will eat you,” and the letters M-I-S-F-I-T-S pierced the night one at a time from enormous screens. Lights shot out of the jagged eyes and mouths of two huge, orange jack-o’-lanterns that flanked the far ends of the stage. The arena erupted as original singer/songwriter Glenn Danzig strutted out of the dark to join original bassist Jerry Only, long-time guitarist Doyle Wolfgang Von Frankenstein, hired gun/ex-Slayer drummer Dave Lombardo and hired gun/rhythm guitarist Acey Slade on stage. They thundered into “Death Comes Ripping,” the opener of choice so far for these limited reunion shows. After blistering renditions of “I Turned Into A Martian” and “Mommy, Can I Go Out and Kill Tonight,” the iconic frontman addressed the stadium. “I think we’re going to throw the setlist out the fucking window,” he proclaimed as he gazed at the tens of thousands of crazed fans before him. Danzig’s demeanor seemed characteristically focused, yet more jovial than usual. He chuckled regularly and at one point remarked that he had dreamed of doing this show since he was a kid. His charisma was palpable as he quipped, “So since the last time you guys saw us here {in Los Angeles} we learned a couple more songs and we’re probably gonna do them tonight if you’re good…and if you’re bad, we’ll do even more!” The crowd roared with excitement. The group was partially illuminated by screens displaying scenes of 50s B-movie horror as they tore through “Vampira,” “Hybrid Moments” and “All Hell Breaks Loose.” After a while, the band slowed down a little to play the deep cut “Come Back to Me,” which was a historic moment as it was the first time Danzig and Only had ever performed the tune together live. 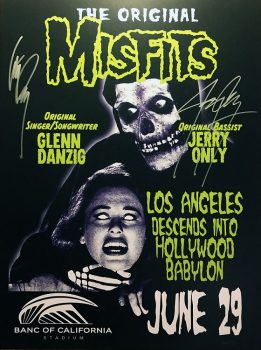 Each of them was in top form as they served up hit after hit. Danzig’s voice was strong as he barked and crooned through an extensive collection of 30 classics from the band’s catalog. His presence loomed larger than frontmen half his age, confidently stalking from one end of the stage to the other with random bursts of wild thrashing. A hulking Doyle continually stomped around, mercilessly hammering his guitar with his fist until it played in his savage style. Jerry Only furiously strummed his bass and provided the signature “woah-ohs” during the choruses. The constant thunder of Lombardo’s drums wasn’t just heard, but also felt as he masterfully kept everyone in time. Throughout the show, Only brutally smashed multiple basses and tossed them aside as roadies rushed to pick up the pieces and supply him with yet another instrument to victimize. At one point, Danzig jested, “Beat that bass, Jerry! Beat it like it owes you money!” Danzig and Only seem to have put their differences behind them and their synergy makes their past issues seem like a distant memory. Fans were delighted when the reunion was announced, but they were also unsure if The Misfits could still deliver the goods. However, the horror punk pioneers delivered on every conceivable level and the audience responded in turn. The transference of energy from the band to the crowd and back again climbed to levels rarely reached in the era of cellphones and the insidious cone of silence they create. Of course, many people filmed the concert, but thankfully there were legions of fans fueling the performers by going crazy throughout the entire night. Near the end, everyone sang along with the anthemic “Hollywood Babylon,” “Die, Die My Darling” and “Astro Zombies.” They moshed during “Skulls,” and they cheered wildly as the band rounded it all out with “Last Caress.”

However, after The Misfits exited the stage, the audience refused to disperse and chanted for more music. A few minutes passed before the group returned for the encore with Danzig quipping, “Okay…I guess you aren’t goin’ no where, are you?!” After teasing a few songs they could play next, they launched into a string of classics including “Bullet,” “She,” and “Halloween.” They ended the night with “We Are 138” as the masses belted out the chorus. It was the perfect way to end the amazing show.

Prior to The Misfits set, special guests included a variety of veteran touring acts who have headlined innumerable gigs of their own. It is interesting to note that most of the bands on the bill have broken up at some point in their long careers and later reunited in one form or another. Starting around 5pm, each of the openers had a unique style and energy. The newly reconfigured Cro-Mags performed first and delivered their signature brand of hardcore. They were followed by the seasoned English biker punks Anti-Nowhere League. Both have had respective cult followings since the early 80s and they were fast, loud and full of raw energy.

Then, The Distillers, punk icons who reunited last year after breaking up in 2006, took the stage. They began with “Sick of It All” and singer Brody Dalle’s distinctly deep, rasp echoed across the arena. Their guitars blared untamed riffs as large pits swirled in different floor sections while the group played “Seneca Falls” and “The Young Crazed Peeling.” The attendance continued to grow as patrons filed into the stadium in an effort to see the performance. During a raucous rendition of the hit “City of Angels,” the L.A. crowd seemed more than happy to sing along. Dalle did little talking between tunes aside from occasionally thanking the fans for their enthusiasm. At one point, she did say that she “liked the pit in the back” and later dedicated their last song, “Drain the Blood,” to the headliners.

After that, Rise Against opened with the fast-paced “Architects.” A large number of people had flooded the arena by this point in the evening, but initial excitement slowly turned to confusion for about half of the audience. As the band progressed throughout their set, many patrons stood motionless and seemed bewildered as to why Rise was on this particular bill. The band was gracious about following the “punk rock pioneers” that proceeded them, had a lot of energy and worked hard to pump up the fans for The Misfits. Don’t get me wrong, a couple of pits formed and many in attendance enjoyed their portion of the show. However, their mainstream look and polished sound felt very out of place, compared to the preceding acts who had consisted of grizzled cult icons performing predominantly raw, old-school punk songs. The dissonance was apparent as the crowd seemed equally divided while the musicians played their hit, and modern radio staple, “Savior.” Rise has most likely sold more albums than the other openers, but their sound was so vastly different from every other group that played, including The Misfits, that it seemed odd they should play just before the headliners.

As for the venue, I would definitely see more shows at Banc of California again, but I would also try to scope out cheaper parking beforehand. Parking was cash only and cost $40. It was very close, but $40 felt like a lot. Once inside, an assortment of brats and beer were available and were reasonably priced for a concert this size. It was tough to find access to the floor, which  wound up being at the far end from the entrance of the arena. I was in the VIP floor section closest to the stage and could see and hear everything very clearly. The huge, open-air stadium vaguely reminded me of a couple of my favorite amphitheaters that have been torn down in recent years. I noticed a heavy security presence throughout the evening, and they seemed to be on high alert as they wove throughout the crowd. It felt like they were constantly tackling people around me all night. I saw at least 5 men taken to the ground hard and immediately pig-piled by security for jumping the barricade into the VIP section.

The Original Misfits’ next performance will be at Madison Square Garden on Saturday, October 19th, 2019. Supporting acts include Rancid and The Damned. Get seats while they last at ticketmaster.com. Whether or not you’ve managed to catch any of these shows yet, do yourself a favor and go. I saw them at their previous L.A. appearance at The Forum in 2017 and this show was just as amazing, if not better than that one. This historic reunion isn’t likely to continue for long, since each member has various side and solo projects.

Danny Wimmer Presents has announced that Aftershock 2020, scheduled for October 9 – 11 at Discovery Park in Sacramento, CA, has been rescheduled to October 7 – 10, 2021, and has released the following statement:  After all […]

BY MAURICE NUNEZ | Go Venue Magazine Cinepocalypse has terrorized Chicago audiences at the historic Music Box Theatre with an annual slate of premiere films, guests, and bloodcurdling entertainment. Tonight was no different as they were premiering Glenn […]