Rocklahoma 2019 we came, we sweated out the heat, and we rocked our music loving brains out or at least over 77,000 rock fans seemed to.  Wow rock fans set a new record of attendance numbers this year that blew away every previous one despite the Cancelation of metal legend Ozzy but hopefully his time off means he can come back in the future and we wish him the best in health. 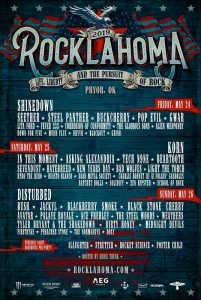 I have to say instead of the usual  lineup and band info that is always thrown down your throats I’m going a different route and letting you see a festival thru the eyes of a photographer and aspiring  writer the man, the myth, the legend myself  Kyle “Buttercup” Million.  So sit back and I’ll try to welcome you to my world.

We started our day Friday headed into the media area got our bands and laminates set up our table and interviewed those who came to the media tent.  To be honest this year we were very impressed with the new improvements and layout of the festival grounds.  It made it nicer not having three stages all crammed next to each other and most of the attendees we talked to agreed that the grounds where dryer even with the late night storms.

I haven’t worked so hard in a while and while the heat took its toll and wore us out running from stage to stage or back to the media area we did our best from covering Lita Ford’s amazing vocals to avoiding the rain of blood from GWAR to capture some amazing shots to share with fans.

Have you ever had a band or performer from your youth that you dreamed of seeing live or a newer band that you just love, well this year ROK had both and more to offer fans.  A prime example for me would have been Lita, GWAR, and Bad Wolves.  For a long time fan of KISS Ace Frehley was the choice and none of this year’s performers let us down.  Kansas City’s own Tech N9ne drew a bigger crowd than most of the metal bands despite people bashing the choice to have him on the bill all spring.  Tech N9ne is one of the few cross over artists that is adored by fans of both genre’s and if by some weird twist of fate you don’t know who he is google and learn f how he had tremendous support to up and coming artists, and all the charitable work he does.  Wow see how easy it is to get off track when you love music and are trying to figure out how to fit three plus days of an annual party into a short story.

Ok, ok back to the festival through my eyes forgive me if I keep going off track.  Everyone says things like they wish they could do what we do or can I be your assistant, well my assistant this year had the privilege of finding out how draining this can be.  Festivals are more than just a quick interview or shooting three or four bands at a single concert and boy did she learn.  Running to try and capture a set, forcing yourself to rest so you don’t overdo it and choosing which bands to hop in the pit and shoot the first three songs trying to capture that magical shot with just the right stage lights shining behind the target. Myself I think the hardest thing to do is say I have to sit this one out and just use some of the venue photos, otherwise even the healthiest person could end up overheating and getting thrown out of the game for the rest of the weekend. Luckily these rest breaks also provide rare opportunities like spotting other bands in the crowd and watching other performances, or just meeting the average Joe and talking out why they came and what they get out of it.

I made a point to talk to as many fans as I could while waiting for each set to start and found out some interesting points of view about ROK;

Truly amazing the things people talk about and what you see while you’re trying to capture and review an event like this and what I took from it over all else was it was a family vacation for most and thru this event people from all across north America and even some other countries around the world come to be with good friends and great music despite weather and distance.

So to wrap this up before I lose your attention I would like to say that the folks Who ran Rocklahoma this year made us feel welcome and resolved every issue fast and never seemed upset at us for questioning something, in the past we always felt like a red headed step child in media and due to these new attitudes and the improvements made and talked about for the future I will Gladly recommend this festival for all and come back to share it with the world.

Thanks Rocklahoma and more so thank you to the Fans who make this event possible each year!

See photos below:
[Be sure to click any to enlarge the photos]

Rocklahoma is set to take place on Friday, May 24, Saturday, May 25 and Sunday, May 26, 2019 at “Catch The Fever” Festival Grounds in Pryor, Oklahoma, just outside Tulsa. Now in its 13th year, America’s Biggest Memorial Day Weekend Party will feature […]