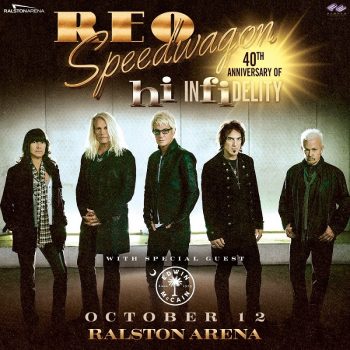 On Tuesday, October 12, Ralston Arena in Omaha, Nebraska was the place to be because the classic rock band, REO Speedwagon, was in town. For a Tuesday night, it was a well-attended concert. It was my first indoor show since prior to the pandemic starting, let alone an arena show, so my feet were cold getting used to the ice hockey rink under my feet. But, nevertheless, I still had a good time.

Opening up for REO Speedwagon was singer-songwriter Edwin McCain. At first, I was a little confused, as REO Speedwagon’s gear was on stage, but it was just Edwin McCain playing acoustic guitar, Larry Chaney on electric guitar, and Craig Shields on woodwinds. A bold trio, if you will. And they were great! McCain’s vocals still sound like they were from the late 1990s. He had a great sense of humor, sometimes throwing out quips about his family. And the crowd erupted into a sing-along when he played his signature song, “I’ll Be”. A good showing for Edwin McCain.

REO Speedwagon have been playing gigs in Omaha for almost 45 years. They are truly a band that loves to tour the midwest. Having a die hard fan base here made sense why they would come back. Lead singer Kevin Cronin, who just turned 70(!) years old last week, still sounds good. Lots of energy coming from him. Really impressed with Dave Amato’s guitar playing. The man is a shredder! Also was surprised to hear some double bass drumming coming from Bryan Hitt. Wouldn’t assume REO Speedwagon to incorporate double bass drumming, but it fit in perfectly. They played all the hits like “Keep on Loving You” and “Ridin’ the Storm Out”, as well as some lesser known earlier songs like “Music Man” and “Son of a Poor Man”. It was a great time all around the arena, full of sing-alongs and good times. I’m glad to have seen these rock legends for the first time.