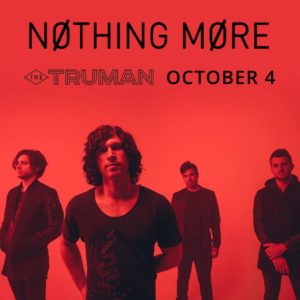 I drove just a little over two hours to Kansas City to see one of my favorite new bands of the past couple years, Nothing More. This was my first time covering a band outside of Nebraska, so it was an awesome experience to step out of my comfort zone. It was at a recently opened venue called The Truman, located in the Crossroads District in downtown Kansas City. I liked how welcoming the new venue was. It looked like everyone who was working there was really passionate to make The Truman one of the most convenient music venues in the Midwest. They even had stamps with Harry Truman’s face for the 21+ crowd.

Palisades from New Jersey opened up the show. It was kinda hard to get the crowd energized as they were the first band, but they managed to pull off at the end of it. They reminded me of Linkin Park and that blend of electronics and heavy and melodic rock. They are on tour in support of their self-titled album, which came out earlier this year on Rise Records. What stood out in their performance was Aaron Rosa’s, drummer, playing. It looked like he was having such a great time on stage, smile and all. And his playing, in general, was phenomenal, as well. It was a good start to the night.

Next up was My Ticket Home from Columbus, OH. This band took me back to the late 1990s and the whole alt metal scene with Deftones and Korn. It was very nostalgic, in a good way. Very groove heavy and intense. Nick Giumenti was cool as a frontman, always having this chill vibe to him. His vocals were reminiscent to Chino Moreno’s, with the soothing melodic timbre. It’s always cool to see these younger bands pay tribute to these 1990s acts with the similar sound. It makes it more appealing to the people that listened to that music back then, while it opens doors for new listeners to check out what influences them. They on tour in support of their new album on Spinefarm Records, unReal, which was just released by the time this review is published. They’ve been getting some considerable radio play on Sirius XM Octane with their new single, “Flypaper”. Awesome performance by My Ticket Home to keep it heavy throughout the night.

The direct support for the night was Hell or Highwater. Led by Atreyu’s drummer and clean vocalist, Brandon Saller, this band has a more straight up rock n’ roll sound to them, compared to Atreyu, which is a more metalcore type sound to them. I must say, Brandon Saller has one hell of a voice. What a force of nature! He was born to perform. During the second song, he walked all over the venue, through the crowd, giving high fives and fist bumps, went up to the VIP section, and even stood on top of the bar and chugged whatever drink he was handed. The coolest part of their set wasn’t even their original material, but the two covers they played. The first cover they played was Outkast’s “Ms. Jackson”, which Kyle Rosa, drummer, rapped the verses, while Saller sang the hook. Lastly, they covered the late Tom Petty’s “I Won’t Back Down” in tribute to him, with the help of Mark Vollelunga of Nothing More on the acoustic guitar. It was perfect timing with so much negativity in the world that is was very uplifting. They ended with the lead single off their latest album, Vista, “I Want It All”, a hard stopping closer that grooves. What a fun set from Hell or Highwater to get us warmed up for Nothing More.

Finally, it was time for the almighty Nothing More from San Antonio, TX to hit the stage. This band has been blowing up ever since “This Is the Time (Ballast)” dropped in 2014. Their latest album, The Stories We Tell Ourselves, has been greatly anticipated as fans were hoping they were going to top their self-titled major label debut, in which, they did. Kicking off their set with a bang with “Christ Copyright”, what a high energy performance! Jonny Hawkins, singer, looked like Tarzan out there, shirtless and ripped, shredding on the drums, jumping all over that stage. And what a voice!  He was a would call the “perfect frontman”. He had the full package! Highlights of their set was their incredible bass solo, led by bassist Daniel Oliver, and at the end, had three people playing the bass at the same time! Incredible! They slowed things down, performing their ballad off their new release, “Just Say When”, which impressed me as a good portion of the crowd knew the lyrics already. Another awesome thing they did was a cover of Skrillex’s “First of the Year (Equinox)”, in which Jonny got on this contraption to use as a turntable of some sort. It looked something out of a sci-fi movie, which looked really futuristic and cool. They ended with “Salem (Burn the Witch)”, a real fast and heavy ripper. What an amazing night of live music in KC. Nothing More exceeded my exceptions vastly. If you have a chance to this Nothing More, you will not be disappointed by their energetic live show and musicality.

CONCERT REVIEW: NOTHING MORE Rock A Sold Out Crowd in Flint, Michigan

December 1st at The Machine Shop in Flint, Michigan, Nothing More put on a captivating sold-out performance.  With Palisades and Greyhaven providing support, it was a night of high energy rock and roll that kept […]

Beartooth, I Prevail, and A Day To Remember Unite to Take Down the Silverstein Eyes Centers Arena

BY JESS BECK | Go Venue Magazine Holy shit. This was the perfect show for anyone whose favorite color is STROBE LIGHT. I have to be honest here for a moment – this was an absolute […]