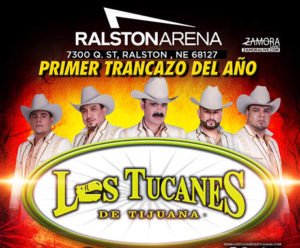 Ralston Arena played host to a dance party like no other. Norteño (northern Mexico) bands, Tierra Cali, El Trono de Mexico and Los Tucanes De Tijuana brought their special brand of Norteño music and light shows to Omaha on Friday, February 16, 2018 and it captivated all in attendance Norteño music has a strong relationship with polka and many times features the accordion. It became popular in the mid 80s during Selean’s run. Prior to each bands set a full blown promo video of the respective band was broadcast over the sound system as well as the humongous video screens. Each band played full sets and the crowd loved every minute of it. They were dressed to the nines and danced into the early morning hours. This was as fun a show as you could ever expect to see. So many lights, so much visual stimulation and so much dancing. I’m not sure if a show like this will come around again, but if it does, you can bet your bottom peso, I’ll be there. For that matter, so should you.