WORDS BY DAVID TAYLOR and PHOTOS BY ROBERT A. CHADWICK | Go Venue Magazine

The day after New Year’s Day. Who would have thought that would be a good night to have a show at Sokol Auditorium? Even though it wasn’t a sellout, the Omaha Chapter of the Black Label Society came out in full force with their rowdy selves. 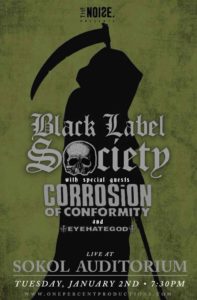 First band up was New Orleans’s Eyehategod. The music was sludgy and grimy, with some progressive elements to it. It was nice seeing guitarist Jimmy Bower of Down and Superjoint, again, since I saw him with Superjoint a couple years ago opening up for Danzig. I was surprised to hear the crowd cheering for them, as they are not a band that has a big fanbase like Black Label Society, so I was glad for their fans that showed up. I was also happy to see vocalist Mike IX Williams because he has been having some health problems, having liver transplant surgery late 2016. He was giving it his all, powering through the set. I hope to hear a new album sometime in the new year.

The direct support came from Raleigh, NC’s own Corrosion of Conformity. This was the second time I saw C.O.C., the last time was at Rockfest in Council Bluffs in 2016. They played their hits such as “Albatross”, “Vote with a Bullet”, and “Clean My Wounds”. Another member of Down, Pepper Keenan, vocals and guitar, has so much bayou swagger in his singing and guitar playing. Woody Weatherman, guitarist, is probably my favorite member, always having the time of his life onstage. Be sure to check out their new album coming out next week called No Cross No Crown, their first with Pepper in over ten years.

Finally, it was Black Label Society’s turn to hit the stage. This was my second time seeing them live, with the last time was a couple years ago at Sokol. Zakk Wylde is one of my favorite guitar players and that night, he did not disappoint. During “Fire It Up”, he unleashed upon the crowd an extended guitar solo, which included him walking through the crowd while he was playing. He also paid tribute to the late Dimebag Darrell with “In This River”. The master of pinch harmonics, he is such a showman. I was surprised towards the end, the crowd was getting a little crazy, sparking up a mosh pit, which was kinda strange since the last time I saw them, there was hardly any contact at all. Anyway, solid show by . Omaha enjoys them and everybody in the band are all talented musicians. Check out their new album, Grimmest Hits, on January 19.

Black Label Society Set List [January 2, 2018]
Genocide Junkies | Funeral Bell | Suffering Overdue | Bleed For Me | Heart of Darkness | Suicide Messiah | Overlord | All That Once Shined | Room of Nightmares | Low Down | Bridge to Cross | In This River | The Blessed Hellride | Fire it Up | Concrete Jungle | Stillborn

Saturday night. Perfect night for a concert. A sold out concert. Sokol Auditorium was the place to be Saturday night, May 27, on Memorial Day weekend. Seether has always been an Omaha favorite. Playing festivals, […]

BY DEAN BIRKHEIMER, Go Venue Magazine “Time heals nothing, it merely rearranges our memory” – Gary Numan On September 27th the Slowdown served up some nostalgia, with a heavy-duty side dish of Shoegazing and electronic […]