On Friday night, Los Angeles rock band Badflower played an intimate concert at the Rye Room inside Lincoln’s own Bourbon Theatre. There’s really no other way to say it; the show kicked ass and exceeded all expectations. If you weren’t there, (why not?!) let me tell you about one of the best shows I’ve seen in a long time.

The concert was opened by the rock trio Fencer (also from Los Angeles) on their first ever tour. Like most opening bands, Fencer knew we were all there to see Badflower (or as front man Field Cate affectionately referred to them, Bitchflower). Cate asked the room, “Does anyone here even know who we are?” The answer was literal silence… awkward, yet totally understandable considering the band only got started early last year and has released just one EP (With) since then. Still, the band went hard, and with a dirty White Stripes sound, it was tough not to get lost in it. Cate performed like he was absolutely out of his mind but in the best way possible.

Hey Fencer, we all know who you are now.

Finally, Bitchflower, er, Badflower, was to take the stage. Now, Badflower is a band who have remained fairly under the radar since their first and only EP release, Temper, in 2016. Their sound could be compared to that of Highly Suspect or Royal Blood, and you may have even caught them on tour last year with Red Sun Rising and Pop Evil.

However, the band is currently gaining attention for their recently released single, “Ghost,” which came out June 8th. If you haven’t heard it, the single is truly one of the deepest and freshest releases rock music has had in awhile, and it demands to be heard. The lyrics are haunting yet highly relevant and necessary for anyone who has struggled or known someone who has struggled with inner demons and the temptation of suicide. Also, it shreds.

Badflower started the set off with the catchy high-energy tune “Drop Dead” from Temper. Front man Josh Katz insisted on keeping the show unprofessional, and the crowd loved it. Highlights were hearing the group’s 2015 debut single, “Soap” (I mean, any song that features the word “delectable” is good in my book), and of course the chilling and moving new single, “Ghost.”

The band even played some unreleased songs and revealed that they will likely be on their upcoming album. No word on when that will be released though… They don’t even know, but it will certainly be one to look out for. 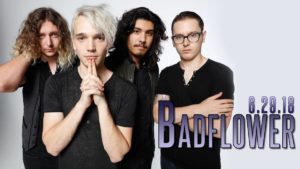 Badflower brought nothing short of pure, raw talent from each band member and sexual, yet emotional, vocals from front man Katz. What really made the show so great though, was the music, as it should. When you have a catalogue of such incredibly well-written music, all the other elements of what makes a live show great just fall into place. This band has that and more, and each song has its own way of drawing you in. Katz remarked that Lincoln had been the best night of their tour so far, and the band stuck around long after to meet fans and express gratitude. Badflower is truly something special, and they need to brace themselves for what’s about to happen to their career. Next time they come around, don’t sleep on these guys.

CONCERT REVIEW: U2 Light Up the CenturyLink Center on Experience + Innocence Tour

Words by David Taylor; and Photos Robert A. Chadwick, Go Venue Magazine I would’ve never thought I would see the biggest band in the world, U2, live. Well, on May 19, 2018, it became a […]

DEAN BIRKHEIMER | Go Venue Magazine When you can maintain your southern roots and still be punk and just for kicks throw in some blues, you can then be called The Black Lips. Formed in […]