Classic rock band, Styx, came into Ralston Arena in Ralston, Nebraska, just south of Omaha, on Thursday, November 18. It was just an evening with Styx, so they brought along with them two sets packed full of hit songs and deep cuts, as well as some recent ones. 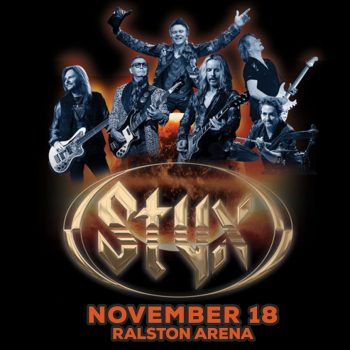 The first set kicked off with “The Fight of Our Lives” off their latest album, Crash of the Crown. Guitarists/vocalists Tommy Shaw and James Young continue to be the two original driving forces, who continue being great musicians in their own right. Other member highlights include co-lead vocalist/keyboardist Lawrence Gowan, who came in wearing this extravagant pilot’s outfit. It was really cool seeing his keyboard rotate on a 360 degree axis. Hit songs from the first set include “Blue Collar Man (Long Nights)” and “Too Much Time on My Hands”.

The second set was a lot of fun. Opening the set was “Red Storm” off their 2017 album, The Mission. The surprise of the night came from original bass player Chuck Panozzo, who has been playing with the band part-time since 1999. It was really cool seeing three out of the five original members on stage, playing classic hits like “Fooling Yourself (The Angry Young Man)” and “Come Sail Away”. And hearing “Come Sail Away” live was such a bucket list moment for me. They ended their show with an encore of two of their biggest hits, “Mr. Roboto” and “Renegade”. The all ages crowd were singing along and applauding when appropriate. This was the last concert that I was covering for Go Venue this year. After a tumultuous year that was 2020, I was glad to see the concert industry back to a new normal. Here’s to hoping 2022 is equally fun and even better!

CONCERT REVIEW: Starset at the Bourbon Theatre in Lincoln, Nebraska

Bourbon Theater – Lincoln, NE – 2/20/18 “Forget scientists. The next space launch we should send up painters, poets and musicians. I’d be more interested in what they discover than anything that takes place in […]

BY DEAN BIRKHEIMER | Go Venue Magazine “The greatness of a culture can be found in its festivals.” – Siddharth Katragadda The temperature nearly hit 90 on Friday the 10th of September, but the music was […]