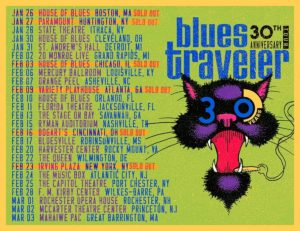 January 31st, 2018, Blues Traveler was celebrating 30 years together with a tour stop at Saint Andrew’s Hall in Detroit, Michigan. It was no surprise with the amount of success Blues Traveler has amassed over three decades that the show was sold out.

Opening the show was Los Colognes, who are based out of Nashville, Tennessee. Nashville is known for country music but Los Colognes wasn’t playing any country tunes this night. A mix of rock, pop and jam band this five-piece group had the crowd riding the rhythms of their harmonies. They have a new album titled, ‘The Wave’, which is out now.

Blues Traveler stepped out to start their show and the crowd roared as lead singer John Popper greeted the audience and thanking them for coming out to celebrate with them. Not wasting much time, the guys got their instruments and got the music going. Known for their seques, one of the fun things about seeing Blues Traveler is listening to them jam in-between songs and then noticing the next song as they start hitting the familiar notes. Tonight, had a couple jams of “Devil Went Down To Georgia”. As a fan of Blues Traveler, this set list couldn’t have been any better. All the songs I wanted to hear, “But Anyway”, “The Mountains Win Again”, “Carolina Blues”, “Hook” and several more were played. It was a fantastic night of live music enjoyment.

With Popper’s harmonica playing and vocal stylings, Chan Kinchla on guitar has a “life of the party” vibe with his energy and warm smile. Tad Kinchla on bass dishes out some low-end chops, energy and smiles as well. Brendan Hill keeps the beat going back on drums and Ben Wilson on keyboards, who had the crowd singing as he jammed out an AC/DC song. I thought members of the band was singing AC/DC but I looked and nobody in the band had a mic to their mouth, it was the crowd all in unison singing as the band provided the music. That was an awesome sight.

As the band waved and walked off stage, I knew there was an encore coming but some folks made their way out until the quick intermission ended as the band stepped back out to play some more. Popper thanked the audience again and talked about another new song they were about to sing off the upcoming album reported to be titled “Hurry Up And Hang Around”. The new stuff is great, so anyone who goes to see them live will get that added treat of hearing some new tracks. They ended the show with a ZZ Top song, “La Grange”. Now that’s just cool.

There’s plenty of dates left on Blue Traveler’s 30th Anniversary tour, but even if you are unable to catch them on this tour, make sure you see them in concert, because tonight, Blues Traveler put on a great two hour show that validates why they’ve been around for 30 years and will continue to be around for many more.

MIKE SHALER | Go Venue Magazine Just four months ago, the Tom Keifer Band came to The Machine Shop in Flint, Michigan and rocked the place out to such high approval, I guess they couldn’t […]