Emily Kavanaugh and Mark Brooks formed in 2012, they are an electronic music duo from Los Angeles, CA .

Not having heard of this synthetic goth pop band, I was intrigued to listen to their new album. The instruments are fun, the chorus in each song is catchy and Emily’s voice is distinct. However, what I’ve come to appreciate is how in depth the lyrics are.

Don’t be fooled by the electronic sounds and upbeat vocals.

The sounds in each song put on a front as do people of being happy and up beat, yet if you listen to the lyrics you can hear about the suffering of depression, illness, addiction, etc. The way they put this album together is extremely smart and creative. 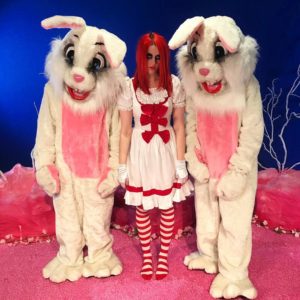 “Tell me why
I like the way you get me high
So alive, that you just make me wanna die
Tell me why
Why I still want you to be mine?
You’re a poison in my mind
Stop my heart and hope to die…”

I’m a huge fan of a variety of genres and bands that create their own music, especially when it’s relatable. What grabs my attention most with this album is I didn’t fast forward any song. Before I paid attention to the lyrics I watched the video for ‘Candy Coated Suicide.’ My first thought was, I feel like I’m supposed to be on something to watch this. However, after listening to the song again and then reading the lyrics, it’s like a light bulb went off.

The video is very fitting for this album. Watching this video I believe it touches on the song ‘Schizophrenic’ as well. Anyone who is familiar with a Schizophrenic, knows how difficult it can be for them as they can have hallucinations and delusions.

I definitely think this is an album that shouldn’t be ignored, and a band that is making their mark!

BY MAURICE NUNEZ | Go Venue Magazine Tonight’s event featured black metal’s finest, Sweden’s Dark Funeral. This evening they were stopping by Grill ‘Em All in Alhambra, CA to meet with fans and give them […]

CONCERT REVIEW: Sabaton with Kreator at The Wiltern in Los Angeles

This past Friday, February 9, 2018 brought Sabaton and Kreator to the Wiltern Theater in Los Angeles. This was the first time I’d seen either of these bands. I was able to catch the tail […]