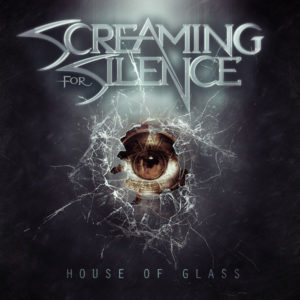 Screaming For Silence is a band out of Omaha, NE that have been in the local scene for over five years. They have shared the stage with bands like Papa Roach, Halestorm, and Hollywood Undead. They won the Ernie Ball Battle of the Bands in 2015 and played the second stage at Rock on the Range in Columbus, OH that same year. They have an upcoming EP called, House of Glass, coming out on July 28. The EP was produced in North Hollywood, CA by Erik Ron, who has produced acts like Motionless In White, We Came as Romans, and New Years Day. Their self-titled album that was released in 2015 was a favorite album of mine of that year.

The title track, “House of Glass” [see video], a very heavy track, has a very catchy hook to it. Very melodic in the chorus. Also, love the use of the piano in the song. Zeb Christensen, singer, uses “House of Glass” as a metaphor for person he’s referring to as someone who talks a considerable amount of nonsense that there is no way of getting out of this “house of glass”. Guitar solo by Casey Newsom was really well done, very Rhoads and Van Halen influenced. Overall, great start to the EP.

“Long Way Up” is the next song on the EP. This song is all about not giving up on what you want and taking that “long way up” to reach that next step, sure you might fought battles and dealt with the haters and found this breaking point to give in, but you are there and you should be proud of that. It starts off with this Chevelle-like riff. The 2nd verse is very bass heavy. Another good simple guitar solo by Casey Newsom. Very inspiring song.

“In Your Eyes” is the third song on the EP. This song is kind of like the last song, not giving up, the person is saying you can over come what you’re battling just by looking into your eyes, you have strength and determination. Loved the programming in the intro. Another catchy chorus. Very bass heavy in the 2nd verse. Powerful breakdown. Through three songs, this is a stellar EP.

“Beetlejuice” is next on the EP. All the tracks on the EP had working titles named after Geena Davis movies, so they kept this one with it’s working title. Opening riff sounds very new wave of British heavy metal. The lyrics in the song deal with the narrator giving, most likely, their significant other way too many chances, saying the same insulting things about the narrator. This song really highlights Zeb Christensen’s unclean vocals, giving him a diverse range. There is also a duel guitar solo that is played by both Casey Newsom and Danny Irwin, guitar.

“Worth Fighting For” is the last song on the EP. This song is about the narrator coming to realize about what he wants in life, after the mistakes he’s made. It’s about coming to terms with one’s self being and clearing all the issues in the way and progressing through life. Love the programming building up to that third chorus. Very melodic song. Heavy ending. A great track to round out the album.

I definitely recommend to check this EP and catch them in town when they play. What a emotional EP to air their grievances on. I look forward to their future endeavors in music and beyond.

Following the release of 2016’s King of Everything, and the reissue of their groundbreaking second album Cloud Factory on Napalm Records, fans have chomping at the bit for new music from JINJER.  Now it is finally time for some heavy […]

English metal legends CARCASS are back with their first collection of new music in 7 years, “Despicable,” coming October 30th via Nuclear Blast. Today, the band has released a new song titled “The Long And Winding Bier Road” below: Commenting on […]