Ace Frehley was the original, iconic lead guitarist in KISS. So you can’t discuss him and his new album without addressing that elephant in the room. But which KISS do you talk about? The original one from the 70’s? The reunion one from the 90’s? The current version in 2018? At this point in history all of them are relevant but I think I’m going to begin with something that has always been a major component of the KISS phenomenon- the emotional relationship KISS fans have with the band members.

Because how you feel about and relate to your own, personal version of Mr. Frehley will entirely inform your reaction to this album.

If you are an “original members only” KISS fan, confident and secure that KISS with Ace is the only KISS that matters… you will probably adore this album. The best thing you can say about it is that it sounds like Ace Frehley. There is a cliche in KISSland that every new album is compared to their 1976 album DESTROYER. Well in Aceland every new album is compared to the 1978 solo effort released under the collective KISS brand- the album that put him on the map as more than just… um… smoke and mirrors.

How does this effort stand up to that? Well the guitar and vocal sounds are similar. So in a casual listening environment such as a vehicle it will reasonably feel like out-takes or B-sides from his hallowed ‘78 solo disc… so winning? But not a single one of the songs even approaches the honesty and urgency of that seminal effort. So if you look more closely than the sonics, you’re likely to come away disappointed. 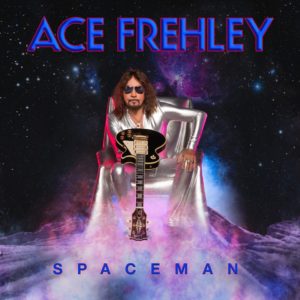 OK, what about people who revere the ‘90’s reunion era KISS? What does SPACEMAN say to that? Well about the same thing Ace’s participation in that tour said. This is “workman” Ace. He’s punching in, working his shift, and doing his job.

That is not an insult. With the promise of his ‘78 solo album, and Ace leaving KISS because projects like UNMASKED and THE ELDER were not “rock enough” we frankly expected great things from Mr. Frehley in the solo realm only to be treated to year after year of “I have a new album coming out” but no music from Mr. Frehley. As a person who enjoys rock guitar I am happy to have Ace on the factory floor, working his shift, turning out product. Put another way- in the 20th century Ace Frehley produced 3 solo records. In the 21st this is his fourth.

Is he inspired? I don’t think so. Is he stretching or pushing himself? Not really. But I’m still glad to hear him doing his thing.

OK, lastly through the lens of the current KISS, what is SPACEMAN? Well current KISS comes with baggage… tell all books… snide and sniping comments between current and former band members… a cycle of (occasional) recording, interviews, publicity, gossip and live gigs. All of which clearly revolve around making those live gigs as lucrative as possible- as they are the only thing that really matters today. Through that lens generally, this is what we would expect. It is analogous to KISS MONSTER or SONIC BOOM. A collection of new tunes that pale in comparison to their historical antecedents but which nonetheless set the stage to go out and perform live and make a living. I don’t begrudge this- but I also don’t want to hear any of these songs live to the exclusion of an old song. In other words if “Rip It Out” comes out of the set to make room for “Rockin’ With The Boys”- no thank you.

And one last comparison to modern KISS- Ace just fired his long time band, including players who have been with him for decades such as Richie Scarlet and Scot Coogan. Who did he replace them with? The back-up band Gene Simmons recently used. Why? The official line is the new ensemble is “younger” and “hungrier” and somehow plays or sounds better. But I suspect the real reason is the new band is cheaper, leaving more money in Frehley’s pocket after each gig. I think that’s what he learned from Mr. Simmons during their recent time together on the road and that reveals Ace to be as mercenary and practical as any other member of KISS. They are not all that different from one another.

So is it a good album? Sure. If you enjoyed the other albums Mr. Frehley released this century, this one is of a piece with them. If you want to hear guitar and vocals that sound like Ace Frehley– rock soldier and elder statesman- that’s what you get. If you want to hear something that is really creative or urgent or that is trying to communicate something to you besides “remember me”… well they haven’t had that spirit here since 1989.

Ace Frehley Releases “I’m Down” Single Ahead of ‘Origins Vol. 2’

Just when it was thought that Welcome To Rockville couldn’t possibly outdo its massive 2021 record-breaking event that featured 161,000 people and an at-home livestream audience of 1.2 million, Danny Wimmer Presents has put together the biggest lineup yet […]