Every May, the Napa Valley Expo hosts a three-day festival filled with great food, drinks, and music. This festival is BottleRock Napa Valley and since 2013, it features headliners and promising stars performing in Napa, California.

Indeed, the city of Napa is a perfect location to host the festival as it is in California’s Wine Country. This area of California is home to some of the best restaurants and wineries in the world. Therefore, it is appropriate that festival attendees should enjoy Napa’s best food and drink while listening to amazing music. 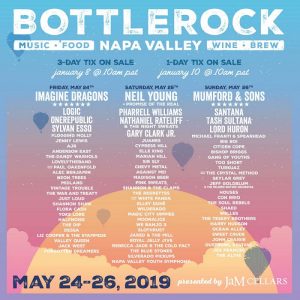 The lineup for BottleRock Napa Valley 2019 contains many performers from pop, hip-hop, alternative, indie, and EDM. For instance, the headliners for Day one are Imagine Dragons, Logic, OneRepublic, and Sylvan Esso. Additionally, the Day two headliners are Neil Young, Pharrell Williams, Gary Clark Jr., and Nathaniel Ratliff & The Night Sweats. Last but not least, the Day three headliners are Mumford & Sons, Santana, Tash Sultana, and Lord Huron. Regarding EDM performers at BottleRock, they are the aforementioned Sylvan Esso, White Panda, The Crystal Method, and Paul Oakenfold.

Indeed, there are also other talented stars that are performing on those three days. The performers of Day one also include Jenny Lewis, Anderson East, AJR, Lovelytheband, and The Dandy Warhols. The other stars of Day two include Juanes, Cypress Hill, Elle King, Against Me!, and The Regrettes. Finally, Day two will also have artists and bands like Bishop Briggs, Too $hort, and Michael Franti & Spearhead.

BottleRock Napa Valley 2019 has a wide variety of accommodations for festival goers to stay in for the weekend. For example, attendees preferring comfortable hospitality can stay in hotels in Napa and nearby cities like Sonoma and Calistoga. However, residents also offer their homes and rooms for rent as well, especially through AirBNB, VRBO, and HomeAway. Furthermore, camping is another good choice for attendees as they can reserve appointments at Skyline Wilderness Park’s Camp Carneros. This camp is two miles away from BottleRock and it offers RV and tent camping options.

There are multiple options of transportation for attendees who are going to BottleRock Napa Valley 2019. Particularly, attendees using Uber can get picked up and dropped off at designated Rideshare lots. There are also public transportation services as well, especially via BART trains, Vine Transit buses, and special BottleRock buses.

As of this time of writing, prices for general admission and VIP parking are not available on BottleRock Napa Valley’s website yet. However, attendees can find parking in downtown Napa, albeit with some restrictions. Attendees who paid for Platinum parking will receive an email about complimentary Platinum parking a week before BottleRock.

Regarding the tickets, one-day tickets cost $159 while the 3-day General Admission pass costs $359. Although VIP, Skydeck, and VIP Viewing Suite passes have sold out, these passes cost up to $1,599.

The food offered at BottleRock Napa Valley 2019 come from some of Napa Valley’s best restaurants. The following restaurants include Morimoto, La Toque, Hog Island Oyster Company, and Il Posto Trattoria. Since Napa Valley is famous for its wines, BottleRock include wineries such as Amuse Bouche and Sterling Vineyards. Attendees can also consume beer at BottleRock, whether from mainstream brands like Pacifico or craft breweries like Napa Smith. Luckily, attendees who dislike beer or wine can still head over to the Bourbon Bar or enjoy craft cocktails.

Furthermore, there are also other amenities at BottleRock that attendees can indulge while listening to live music. Specifically, spas and beauty salons that provide services such as hair styling and hydration therapy. Also, artistic creations on display from artists like Jacques Lesec and Kopol Bonick.

The innovators of Drive-Thru metal, MAC SABBATH, have already announced a return to Southern California for a show at Los Angeles’ Echoplex on January 18, 2020. “We don’t get much sun in Birminghamburger, England, in January, […]

UPCOMING FESTIVAL: In Bloom Music Festival In Houston on March 24 and 25, 2018