“Many fans had given feedback that this song was one of their more favorites off of the album, so we wished to honor them by doing this video. We also wished to showcase our guitarist, Christopher Migdalski’s lead work on this song, as he has been a role model for those afflicted with Parkinson’s Disease and how to overcome disabilities to still pursue his life dream. Our hope is that this will inspire those to continue on in their battle and achieve whatever dreams/goals that they have.” – URN

Mr. Hall had become friends with the band a couple years ago when attending a Hollywood tour date of theirs back in 2015 and expressed interest in producing a video. Over time during their collaboration, it was discovered that Mr. Hall was an accomplished musician and worked with several bands in the Los Angeles are in the 1980s such as Exquisite Corpse and Mad Love. Cleve filled in on keyboards for URN’s 2016 West Coast tour and appeared and helped produce the new promotional video.

Mr. Peterson was the original drummer of the Electric Hellfire Club whom URN frontman/guitarist Dominic St. Charles was also an alumni member. The two had an opportunity to connect during the EHC’s 25th anniversary/farewell concert last year at The Orpheum Theater in Tampa and wanted to continue to work with each other afterwards. Eric Petersen also was recently the touring drummer for former American Idol alum James Durbin.

The video was filmed in Los Angeles, CA by Jackie Bones for Steal Your Ghost Productions and additional footage was filmed by Noel McD of Global Rapture Productions (Melbourne, FL) who also edited the video. URN had worked with Global Rapture previously on their 2015 video “Cast in Amber” which was the first single released of the Epiphany album. Dominic St. Charles co-directed the video with Mr. Bones. URN wishes to acknowledge and thank those who contributed to the crowd funding campaign to help make this video possible. These individuals will get an exclusive private viewing before the actual release of the video to the public.

URN has also completed the writing process on their sixth album which is tentatively entitled “;”(Semicolon) and have been in talks with Thom Hazaert (Thom Hazaert Company/Ellefson Music Productions) to produce the upcoming album with a potential 2018 release date. The band also is in the process of booking tours that will have them return to Canada and Mexico in 2018. 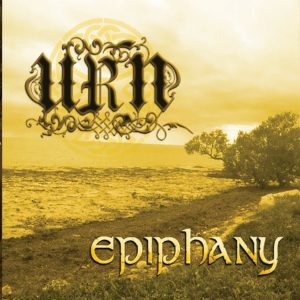 About URN
The U.S.-based dark metal band URN® is one on a musical journey exploring the darker aspects of both the conscious mind and the unconscious soul. The band has been captivating audiences across multiple genres and have been establishing themselves as one the more energetic live acts to see. The band has drawn comparisons by national trade media to such artists such as Type O Negative, Lacuna Coil, Amorphis, Nightwish, My Dying Bride and other similar acts that tend to find a certain beauty in darkness.

URN began back in 2000, while singer/guitarist Dominic St. Charles was still an active member of the Electric Hellfire Club. After fulfilling tour obligations with acts such as Danzig and GWAR, URN went out on two national tours in 2001. The band recorded and released a maxi-single called “Consecrated Ashes” to assist in touring and sold out the 500 copies of the self-release.

In 2003, the band followed up that release with the Desecrated Ashes EP and was met with great success and acclaim. The album received strong airplay support via college and Internet stations all through the United States as well as in Mexico and Canada. URN has also done a several simulcasts with Internet radio stations such as IPM Radio and Metal Works Radio.

URN signed with Rotting Corpse Records in the fall of 2005 and released their full-length LP Dancing with the Demigods with major chain-store distribution through Century Media, Synergy Distribution and Azure Green in July 2006. The album has received rave reviews in many major trade magazines such a Pit Magazine, Explicitly Intense, New Witch, Dark Realms, The Ninth Gate, Brave Words, and Bloody Knuckles, and many more. This album has been out of print since 2008.

As a result, URN toured extensively throughout the United States and Canada and in the process toured/shared the stage with honored acts such as Moonspell, Type O Negative, To/Die/For, Katatonia, Virgin Black, Trouble, Bella Morte, Novembers Doom, Celtic Frost, and many notable others.

The band released their second full-length LP in 2009 on Rotting Corpse Records entitled Scribings of a Forgotten Soul. This was a concept album based on the true accounts of individuals that Dominic personally knew that survived the 1989 prison riots at the State Correctional Institution – Camp Hill in Pennsylvania.

With its release, URN took to the road once again in support of the new album, playing all over North America, including tour dates with Tarja, Finntroll, The Eternal, Swallow the Sun, Katatonia, Blackguard, and Lividity. The band released another promotional video for the single “Reckoning Hour”.

In October 2011, Urn relocated from Chicago, IL to Orlando, FL and proceeded to continue to do headlining tours throughout North and Central America. In early 2014, URN signed with Dark Moon Records and released their fourth studio full-length album entitled “Epiphany” on August 25, 2015 as well as their promotional video for the single “Cast in Amber”.

The band embarked on several U.S. tours to support the release highlighted by attending the 2016 Winter NAMM show in Anaheim, Laconia Bike Rally in Laconia, NH, and GenCon in Indianapolis. The band also released a promotional video for the self-titled track from the “Epiphany” album in Summer 2016.

URN, a band who is always pushing their boundaries and thresholds, looks to continue to do so over the coming years by their life commitment to constantly evolve, adapt, and grow on their musical journey. Through their ongoing collaborations with artists of other mediums such as author/media personality Michelle Belanger of A&E’s Paranormal State, and Cleve Hall, from SyFy’s “Monster Man” who officially joined the band as keyboardist in 2016. Ms. Belanger did guest vocals on Desecrated Ashes ând ˆDancing with the Demigods and appeared in URN’s video for their “Shadow Dancer” single which was nationally distributed to many media channels and is available on the album as well.

Eric James Peterson (ex-Electric Hellfire Club) joined as the new drummer officially in 2017. Both he and Mr. Hall are featured in their new promotional video that just finished production for the single “Silently, I’m Still Screaming” from their Epiphany LP released on Dark Moon Records.

URN has also completed the writing process on their sixth album which is tentatively entitled “;”(Semicolon) and have been in talks with Thom Hazaert (Thom Hazaert Company/Ellefson Music Productions) to produce the upcoming album with a potential 2018 release date. The band also is in the process of booking tours that will have them return to Canada and Mexico in 2018.