Friday, October 22nd, 2021 – For all the fans around the globe unable to be present as SLIPKNOT perform the biggest headline performance of their career to date, the band have announced today that KNOTFEST LOS ANGELES at the Banc of California Stadium will be streamed LIVE on Friday November 5th. SLIPKNOT’s first-ever livestream, the event will allow fans to share all the excitement of a SLIPKNOT gig, both live as it happens, and for a full 72 hours after. Tickets are on sale now at knotfest.veeps.com, priced at a discounted pre-sale cost of $15, with on-the-day tickets being $20. Knotfest Members are eligible to purchase at a discounted price of $12. Tickets bundled with event merch are also available.

As part of the broadcast, ticket holders not only get to see SLIPKNOT’s incendiary new production, live from Los Angeles, but also a selection of songs each from a stacked supporting bill of the hottest bands in heavy music, including KILLSWITCH ENGAGE, FEVER 333, CODE ORANGE, VENDED and a special performance from CHERRY BOMBS. Check out the trailer below:

Ticket holders can still watch the stream up to 72 hours post event, so don’t worry if you can’t watch ‘live’ on the night.

In late August, the Grammy Award-winning Iowan icons took KNOTFEST back to their home state for KNOTFEST IOWA, selling out an expanded capacity show at the National Balloon Classic Field at Indianola, IA. The band is currently on the KNOTFEST ROADSHOW tour, which is snaking its way across the USA, culminating at the Banc Of California Stadium show for this very special event.

If you’re in Southern California, you can still pick up remaining tickets to attend in person. Click here for KNOTFEST event information & tickets, here for the latest SLIPKNOT merch, and here to pick up SLIPKNOT’s No.9 Whiskey, whilst stocks last. 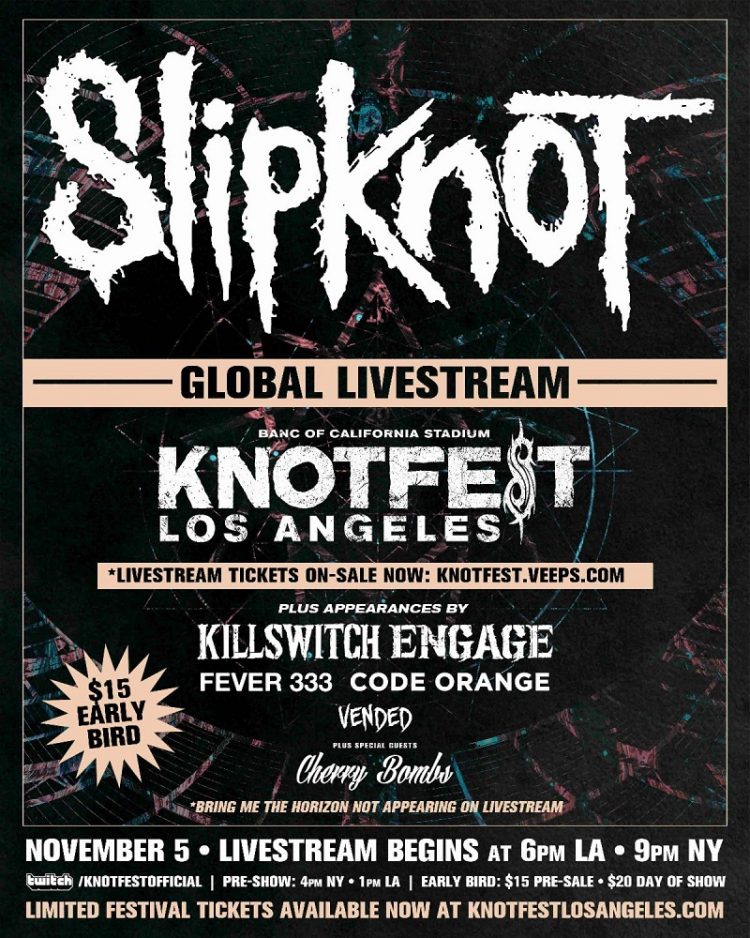 Aftershock–the West Coast’s Biggest Rock Festival–returns to Discovery Park in Sacramento, CA on October 6-9, 2022 bigger than ever, expanding to four full days (after a half 4th day in 2021), adding a 4th music stage and featuring over 90 bands. The […]

LIVE REVIEW: Slipknot Blows the Roof Off the Austin360 Amphitheater

BY MAURICE NUNEZ | Go Venue Magazine Slipknot has been on the road since the end of July touring for the first time in a few years as part of the Knotfest Roadshow Festival. They are on […]