It was surprisingly cool and gloomy both days, this made this experience much more enjoyable compared to the high temperatures we get during the summer. Over 35 bands on both days, carnival rides, drinks, food, campgrounds for those who traveled. This has to be a must go-to when it comes around. Tickets are fairly cheap if you bought the two day pass, in my opinion totally worth it. Closing bands for Ozzfest day 1 where Deftones, Prophets of RAGE and the one and only OZZY OSBOURNE closed the night.

Deftones were spectacular, setting the mood and hyping up the fans. The crowds gathered quickly, fans scattered to get their drinks and then to find their seat. The lawn area was super packed, fans standing close to each other to keep warm while they enjoyed the show. Prophets of RAGE took stage after Deftones, their mood was a bit more upbeat and a bit more crazy if I may say. Prophets performed “Jump Around” by House of Pain that really got the crowd going literally jumping around. To tone things down Prophets paid tribute to the late Chris Cornell by performing “Like a Stone” by Audioslave, saying if you knew the words to the song you were welcome to sing, if you didn’t know the words you could stand in silence 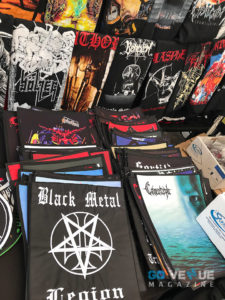 remembering Chris. A very emotional 5 minutes for sure, fans looked up at the sky and stared into the darkened cloudy night, some hugged each other and shed tears, at a distance you could hear an echo of voices singing the words to “Like a Stone”. Prophets of RAGE set came to an end it was time to wait for the prince of darkness to take the stage OZZY OSBOURNE. After 30 minutes of waiting for the legendary OZZY the light shut off and the classic “O Fortuna” by German composer Carl Orff began, what a memorable epic way to start the show. OZZY came out and greeted the crowd “How are you fucken doing out there? Are you ready to go fucken crazy? Let the madness, begin!” and “Bark at the Moon” began. Going right into “Mr.Crowley” my favorite song, the organ player was flawless, you could feel a very powerful energy as Ozzy stood there with arms open and a dead stare at the crowd as if he was feeding of the crowds energy, thousands of horns held high as he began “Mr. Crowley, what went on in your head?” then “I Don’t Know Followed”. After this OZZY decided to change things up a bit and with the help of Zakk Wylde they began to perform a few Black Sabbath songs “Fairies Wear Boots” and “War Pigs”. Ending the show with “Mama, I’m coming Home” and “Paranoid”. The night was cold many fans in the lawn area started to leave before it was officially over, the long walk and traffic ahead was probably the most undesirable thing at Ozzfest Meets Knotfest. 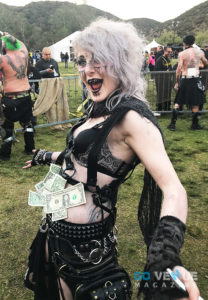 When arriving at Ozzfest Meets Knotfest day two, we noticed the ground was wet and muddy, it had rained over night, we were hoping it didn’t rain on us during the festivities. It was still very cool and cloudy everyone was ready for day two! Knotfest had some amazing early performers like GoatWhore who I actually had the pleasure of interviewing as well as the band ONI. There was a huge crowd surrounding the stage where GoatWhore was to perform. Testament who actually performed without lights. That’s right, I don’t know what the issue was with that but listening to Testament‘s live performance in the dark was super wicked. Closing acts for night two where Stone Sour, Marilyn Manson, Rob Zombie, what a way to go out with a bang. Stone Sour came on stage around 7pm they had a good vibe and it kind of prepared the crowd for the last two acts of the evening. When Marilyn Manson came out on stage it was a bit past 8pm everything became dark on stage people started cheering and “Lacrimosa” by Mozart began. I can hear the excitement all around me, it really excites people when they hear these monumental songs as openings it gives us a sense of power and triumph. 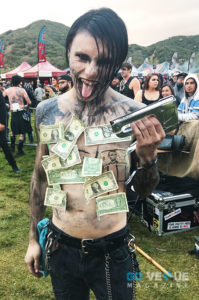 “Lacrimosa” smoothly transitioned into Marilyn Manson “Revelation #12” Manson came out in a mobile stand, considering his leg injury he was up there and gave us an amazing show. Manson went through maybe 4 costume changes where we had to wait around because of his injury made it difficult for the changes to go by smoothly but every single costume was grotesque and amazing. Some of the songs performed by MM where “Mobscene,” “The Dope Show,” “Sweet Dreams” Eurythmics cover and ended with “The Beautiful People”. It was time for the headliner Rob Zombie the crew rolled out a giant boom box and set up on center stage. Graphics started to appear on the back drop that read “ZOMBIE” the show started with “Dead City Radio”. After the third song there was a small intermission where Zombie improvised with the band and was hyping fans up it was very entertaining and his words fit really well with the music rolling it into “Living Dead Girl” other songs performed where “Get High,” “Never Gonna Stop”. Rob Zombie’s energy was contagious and electrifying, almost made us forget how cold it actually was. Zombie ended the show with “Dragula” right before the song ended they released confetti into the crowd, the song ended and Rob thanked the crowd and thousands shouted “Zombie, Zombie, Zombie” what a spectacular ending for this two day festival. Cannot wait for OZZFEST Meets KNOTFEST 2018.

Upon A Burning Body – 2nd Stage

Today, ROB ZOMBIE releases the music video for “Shake Your Ass-Smoke Your Grass” off the highly acclaimed The Lunar Injection Kool Aid Eclipse Conspiracy. Watch the music video which was animated by Balazs Grof, watch below: ROB ZOMBIE will head on the […]