(Anaheim, CA – November 9, 2018) — New Years Day have just dropped their new song “Skeletons” off of their forthcoming full-length album, which is slated for release spring 2019. The track is available on all streaming services HERE. Check out an interview Ash Costello, New Years Day’s frontwoman, did with Alternative Press about the track and new music HERE. 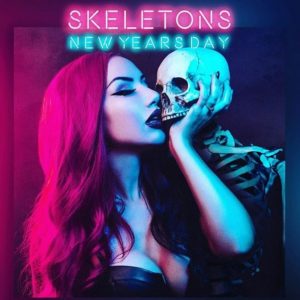 “I have been working for over a year, constantly writing new music. We want everyone to know that a new wave of music will be coming to you soon and I thought our new song ‘Skeletons’ would be a great intro to the new world of my band, New Years Day,” states Ash about the band’s newest release. “More than anything, I wanted the era of New Years Day to be rock that is also fun to listen to.”

“‘Skeletons’ is about wanting to know all the parts of someone, even the parts they deem to be negative. It’s saying that when you are into someone, you’re into ALL of them, and want to love the dark in them as well as the light. It’s a fun rock song with a heavy riff intro, a bouncy lead vocal line, and a soaring chorus.”

The Anaheim rockers will be hitting the road with Halestorm and In This Moment starting on November 16th in Norfolk, Virginia and wrapping on December 16th in Saint Petersburg, Florida. The band will be hitting major markets such as New York City, Dallas, Orlando, Detroit, and more. This will conclude a full year of touring with the all-female-fronted U.S. tour. For more information on tour dates and to purchase tickets, visit the band’s website HERE [r20.rs6.net]. Fans can also purchase VIP passes, which doesn’t include a ticket, HERE.

Formed in Orange County, Calif. by Ashley Costello, New Years Day shook the scene with their Century Media debut, Victim to Villain, in 2013 featuring their breakout single “Angel Eyes.” The five-piece later cemented their place in the heavy music landscape with their Epidemic EP and critically-acclaimed Malevolence full-length in 2015, clocking more than 20 million views on YouTube. The band has since become the most visually-captivating group in modern rock, playing for millions of fans around the world, sharing the stage with Ozzy Osbourne, Nine Inch Nails, Escape The Fate, Hellyeah and Five Finger Death Punch while also headlining the longest-running touring festival, Vans Warped Tour, in 2017. As new challenges and new worlds beckon, the band released their most recent EP, Diary of a Creep, in January to pay tribute to the artists who shaped them thus far. The EP featured renditions of Garbage’s “Only Happy When It Rains,” New Order’s “Bizarre Love Triangle,” No Doubt’s “Don’t Speak” and their original track “Disgust Me”. Watch the music video for “Disgust Me” HERE.

CONCERT REVIEW: Power Duo In This Moment and Halestorm Co-Headline a Sold Out Hammerstein Ballroom in New York City

On Saturday November 24th a trio of female fronted bands brought their very own Hard Roll to a Sold Out crowd at New York City’s Hammerstein Ballroom. Already on the third leg of this revolutionary […]