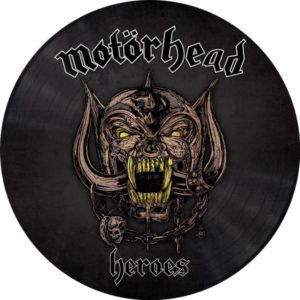 On April 21st – aka Record Store Day – MOTÖRHEAD will be issuing a 7″ picture disc of their runaway hit cover version of David Bowie’s “Heroes”, with the art featuring a new “sketch” take on the classic war-pig. The flip-side features “Heroes (the Wacken Family Choir Mix)” with previously unheard audio of the crowd at 2017’s Wacken Festival singing along to the single as it was being officially launched via the festival PA, an emotional moment of celebration and tribute which can now be shared globally.

“It’s such a great Bowie song, one of his best, and I could only see great things coming from it out of us,” said guitarist Phil Campbell, whilst drummer Mikkey Dee added, “Lemmy was very, very proud of it, not only because it turned out so well, but because it was fun!”

MOTÖRHEAD remain one of the true premier giants of rock n’ roll, continuing to be celebrated by fans worldwide despite the tragic passing of leader/founding member Ian “Lemmy” Kilmister in December 2015. Their last studio album, Bad Magic, reached the top 20 album charts in 17 countries worldwide, including a #1 spot in Germany. Their latest album, Under Cöver, was a top 20 album in both Germany and the UK.

British Heavy Metal legends Saxon will deliver a full-roar-fun-down set of covers with their latest album Inspirations, which drops a brand new 11 track release featuring some of the superb classic rock songs that influenced Biff Byford & the band. […]

MOTÖRHEAD to Release “Louder Than Noise… Live in Berlin” via Silver Lining Music on April 23, 2021

MOTÖRHEAD and Germany… it was always a love affair. Throughout the Grammy-Award winning band’s illustrious 40-year career, Germany never wavered in its loyal and fanatical support of MOTÖRHEAD’s untouchably loud rock ‘n’ roll, with the band regularly […]

Motörhead To Release Fast And Furious “Rock It” Single/Video

Motörhead and Germany… it was always a love affair. Strap in and enjoy a super-slice of what Motörhead’s forthcoming Louder Than Noise… Live in Berlin will be offering, with the single and video for “Rock […]