When six-time Grammy-nominated Jourgensen had released the final album of his blistering Bush-era trilogy – Houses of the Mole, Rio Grande Blood, and The Last Sucker – where he just railled against George Dubya, he realized that it’s not about the candidate.  “I always knew this, but on that album it really hit home that we’re all suckers.” 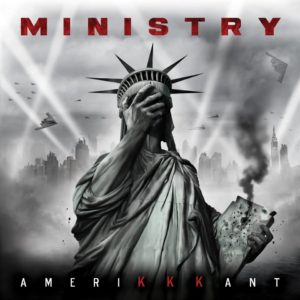 With the upcoming, politically-charged AmeriKKKant, he wanted to focus on why we would elect someone like Donald Trump, rather than have the songs be about the current administration.  “That’s more interesting that who the f*ck’s in charge,” he adds.  “Even the ruling class overlords don’t know who’s in charge.  As a society, we’re not pulling our weight.  Our value and morality systems are completely out the window, it’s become all about a monetary system, what every action is based on.  You make bad mistakes as a human being when you’re chasing the green dragon, the almighty dollar.  When that’s the motivating factor in our actions, we end up with someone like Trump.  And that’s what I wanted to comment on with this record.

AmeriKKKant will be released March 9 (Nuclear Blast) and Ministry will hit the road with its politics-meet-P.T.-Barnum live show, complete with giant inflatable Trump chickens, video screens projecting equally politically-imbued images to compliment the music, and lots of surprises.  It’s going to be a wild ride.

Concert Review: Ministry at The Bourbon in Lincoln

On Thursday, April 5, 2018, the Chicago’s industrial/thrash metal band Ministry performed a nearly sold-out show at The Bourbon in Lincoln, Nebraska promoting their latest and fourteenth studio album AmeriKKKant which released on March 9th. […]

PHIL CAMPBELL AND THE BASTARD SONS are back in town! The Hard Rock powerhouse from Wales announce their new album We’re The Bastards today, to be released on November 13th via Nuclear Blast! The pre-order starts today, […]