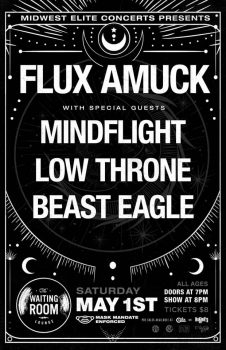 On May 1st at The Waiting Room Lounge, Flux Amuck headlined what was an incredible night of hard-hitting rock and roll.  The cost of a ticket was $8.00, and this got you not only the headliner, but Mindflight, Low Throne and Beast Eagle. That is $2.00 per band. What an amazing deal.

To be honest, the size of the crowd was not what I expected. I felt the amount of music to the cost ratio would have attracted a few more people.  The people that were there certainly got their money’s worth as they were entertained fully by all four bands.  Midwest Elite and The Waiting Room did an amazing job, and the result was an amazing show.

Opening things were Beast Eagle.  This is a 3-piece band showcasing, Earbleeder,  Austin L’Ecuyer (The Chaotic Ginger) on guitar, Earthmover,  Aidan Colling on bass, and Gutbuster, August Sievering on drums.  They were inspired by bands like The Sword and Elder.  There are 2 things that sets this band apart from most others.  One. They are instrumental and two, they really know how to get the most out of their instruments.  I mean, there were vibrations emanating from the stage that I could not believe came from those three guys.  The best way to hear this band is live.  Speaking of that, look for their first album to be released soon and guess what; It is a live album.  “Live at Flat Black Studios.” As cool as that is, nothing beats a live show, so do yourself a favor and check them out in person as soon as, and as many times as you can. You can keep track of Beast Eagle by following them on Facebook at and Instagram.

Two amps, 2 snares, 2 dudes.  This is Low Throne. The 2 dudes are Soldier on drums and Otto on guitar/vocals.  This band formed in 2010 as Tetelestai and changed their name back in 2019 to avoid any possible band name conflicts and/or confusion.  The band has but one intention and that is to play every note, from the first to the last as if it will be the last note they ever play. Once they start you are overwhelmed with a tsunami of sound that quickly surrounds you and draws you in. How they create the sound they do is a mystery.  Many have asked about the set-up and engineering, but according to them, “We are not about to pass it out like potato chips.” Can’t say that I blame them.  During the Covid downtime, Low Throne spent time working on a full length. The goal is to release it before the end of 2021.  I know, I’ll be looking for it.  In the mean time, you can get your Low Throne fix by checking them out on You Tube.

Up next is an Omaha favorite. Mindflight features Chad Zephyr Dividead on vocals, guitar, and programming.  Jake Bauermeister on Drums and Michael Johns on Bass.  This band has a faithful following and never lets their audience down.  Mindflight is a pure rock and roll band that can take you to another realm. As I listened to them, I could detect a bit of STARSET and that, my friends, is a good thing.  Most of the time you will find bass players standing in the corner, in the dark, playing quarter notes.  Not Michael Johns.  This fella’s drive meter is through the roof, and he does not play the mainstream game. He has the energy of a teenager, but the timing of seasoned pro.  I love the way Jake thumps.  He has a dynamic and bombastic flair and when you think he has nothing more to give, he ups the ante. Chad of course as we all know was a DJ for 89.7 The River. His vocals are robust, and he seems to be very secure behind the microphone, it is however his guitar abilities that seized my interest.  Killer solos, mind-bending riffs and superb chords.  His method and phrasing shined brightly.  All-around, Mindflight are just first-class and professional.  Check out their latest release “Reflections” here as well as on other digital platforms.

I covered Flux Amuck before. They were the opening act for Hybrid Theory and The Defnotes.  This time they headlined.  I remember them being extremely unique, this was the direct opposite of the bands they opened for as those bands were cover/tribute bands.  I am not sure if it is fair to try and label Flux Amuck.  You cannot call them a power metal band.  You cannot call them a prog band, and they certainly are not an electronic band.  But then again, maybe they are.  Maybe they are all 3, and more.  They are wholly different from what is out there.  Who they are is Sam on vocals, Toby on Bass, Jessie on everything. Dakota on guitar, and Geoff on Drums. What the are is a band without a niche. They experiment with different sounds, effects, and devices. Their ability to lock in so many different spheres of music is uncanny.  Flux Amuck throws you a relentless stream of innovation. At one point, they are head banging like maniacs, then out of nowhere they bring Kate Prokop on stage and hit you with a female lead.  It was brilliant.  By the way. Kate can belt. They are a captivating band that you really must check out. I promise you will become a supporter.

The Waiting Room Reopens with a Killer Show

JOE DeSANTI | Go Venue Magazine The Waiting Room Lounge in Omaha, Nebraska, reopened its doors on Friday night June 19, 2020, after being closed due to the Coronavirus epidemic.  The entertainment for the night […]

The Monster Jam Races Into Omaha