For 30 years the hope of karma was stretched out in the unforgiving deceptive title of the album “…And Justice For All” while the over 9 and a half minutes of pure metal raging sounds of the song, with the same name, proved that justice was fatally flawed in the lyrics, brutally blind and a masterful subject created by metal Grandfather Gods Metallica.

Teasing a deluxe remastered mix recently, the potential Metallica “…And Justice For All” 30 year tribute re-release album will render us all comatosed soon, as headbangers who existed during the onslaught of the original, attempt those gyrating neck moves of our youth and pay a painful price for it. Not that this worldwide touring band hasn’t accumulated more youthful fans in the last several decades, but there are many fans who are grandparents now and recall their teenage brute with a Metallica song in mind.

Many diehards lost their minds in what wasn’t even the mid 1980s yet with “Kill ‘Em All” in 1983, followed by “Ride the Lightening” in ’84, “Master of Puppets” in ’86, and their fourth studio album featuring new bass player Jason Newsted debuting on “…And Justice For All” in 1988 after a tragic car crash took the life of original bassist Cliff Burton.

Newsted doesn’t appear on the new release and there may be an absence of justice in that as it was widely reported there was difficulty among the group in reproducing this particular masterpiece as a deciding factor in Newsted‘s departure some years ago. Not that Robert Trujillo doesn’t have skills and isn’t capable. He’s been the bass face for some years now and is just as qualified to bass beat our blistering minds senseless with old favorites and new songs as well.

Controversy aside, and there have many been many with lost players, absurd accusations of being sell outs over haircuts, and a master of metal bickering therapy session documented for the world to witness, Metallica is still on tour today and filling and selling out seats in concert halls and stadiums. A little more grey showing in their hairlines, these monsters of metal can still rock like nobody’s business and with a lot more on the lineup to choose from as fists pumps still decorate a crowd for a decade over a quarter of a century.

Reminiscing over the original cuts, one would have purchased the album on vinyl at now obsolete record stores, unless you are fortunate enough to find a vintage sale of obscure collections these days. In the 1980s, you could also purchase your metal on cassette tapes and attempt to blow your car speakers that way as CD’s were not yet available to the masses. Downloads were unheard of but there was something very cool about scouring hundreds of records in a store, slapping friends over the insanely artistic album cover designs, and asking the shop owner where the new imports were. In those days, an interestingly designed album cover might inspire a purchase without knowing any information about a band at all. It’s too bad that doesn’t seem to matter anymore and album cover designs are no longer a stimulating expression in art.

Visually, these days, videos are streamed online and MTV lost it’s edge years ago when Headbangers Ball slipped into oblivion along with music videos of any significance on any television music channel, and was replaced with reality shows and many other unwatchable things that metalheads don’t waste their time with.

Looking back at Metallica in those days, and feeling nostalgic, I slip on the vinyl still in my possession and rack my brain attempting to determine which of the 9 songs on the Justice album was my favorite. It’s too difficult to pick just one.

So, let’s start with the first song on the album “Blackened” where a slow intro fades immediately into thrash able metal the way it’s supposed to be played. Lars Ulrich as a drummer is a force of nature. There’s no getting around it. Kirk Hammett intensely impressive on guitar, Newsted on bass with the original version, and the always aggressive but insanely talented frontman James Hetfield, as always, playing double duty with guitar and vocals, it just speeds straight ahead of it’s time, at the time.

New windows were opened as glam bands dotted the atmosphere in the 1980s and Metallica silently screamed ‘screw that – spandex and facial make up just ain’t our thing’ and they gave us pure metal in it’s full artistic stripped down gallant glory. No one cares that a track could be more than three minutes long when it’s Metallica cranking through your speakers. And the first song does the band justice leading into it’s signature piece and name of the album. 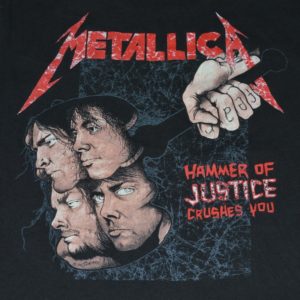 There’s no doubt that the song “…And Justice For All” makes a mark on metal. Such a sweet and solemn introduction on the single, with blasts of brash drumming and a bombastic explosive bass that inspires one to turn it up and test the limits on your audio equipment. Powerful and dynamic are the words that “Justice is lost, justice is raped, justice is gone, pulling your strings, justice is done, Seeking no truth” and it’s about as apparent and foretelling as a 1990s crime of the century criminal verdict in its’ insistence that the blind lady of justice is a bitch and destroys the hopeful wish there could ever possibly be justice for all, again misleading us all with the title.

The new mastered edition has been criticized in the press by the former contributor on the original, Newsted, that the rumored absence of bass in the potential new track is a shitty sore spot for him. Feeling that bass with speakers about as old, but still so far as reliable as my phonograph, I have to admit it breaks my heart some too, if that’s the case. What is metal without that bass? Not one to question the successful crowning metal Gods, I just can’t understand the absence of such an essential piece of the metal puzzle. It’s a question I’ll have to absorb and decipher when I’ve heard the new edition in it’s entirety.

For now, I’ll go back to the old days and revere the masterpiece that it was with Newsted‘s iconic skills collaborating with an undeniable favorite among my personal musical preferences as an admitted die hard Metallica fan.

If beauty is in the “Eye of the Beholder” then my metal idols didn’t skimp on making me move the needle on the record. Though it isn’t a song I’ll immediately go to in my more modern day IPOD, it isn’t one I’ll skip either.

Then we come to the single “One” and probably the most familiar on the album for most and was played in heavy rotation on music channels with an cringing visual video that may have disturbed uptight and fearful parents but only increased sales for teenagers back in the day.

“Hold my breath as I wish for death, Oh please, God wake me,” pleas for relief with a still long haired Hetfield singing angrily into the microphone as Hammett‘s guitar solos rip through your spine like a nail scratching your annihilated and itching nervous system. Historically, it’s the most successful and easiest one to choose on the album as a favorite, and unbelievable as it is, now a classic, this song is still a staple demand by old and new fans alike. Maybe it’s just because we’ve heard it far more than the others on the album, it still revs me up and I can’t dilute its’ dimension as a contender, although there are previous albums that created my interest in the first place that would slip this one down the list.

Without listing each single and sparing you any more of my headbanging metal memories, I won’t choose a favorite and will conclude with “Harvester of Sorrow” as a Metallica single that makes me want to ditch the phonograph, sift through my collection of CD’s, jam it into my old car stereo and test those speakers as it cranks at, like 11, while I drive fast down a back road, which is something you can still do in Alabama. And I’ll remember a tribute to Burton while blasting “To Live Is To Die” and mourn the loss of Newsted‘s skills in the old days of Metallica, ponder what’s to come, and hope I can score those tickets to the live show south of me in Birmingham this coming January.

Metallica doesn’t surprise us with longevity. It still amazes us with its’ unwavering significance as grunge came and went, rap music was born and boy bands are now attempting a comeback and touring as mature adults. No matter how many decades long the Rolling Stones can command a stage, it just can’t compete with the insistence of Metallica fans who beg, please, never quit giving us the screeching metal sounds of our youth while you experiment with new material. It doesn’t matter. Real fans will never abandon the fabric metal fray of Metallica.

Danny Wimmer Presents is proud to announce that rock icons Metallica will exclusively headline all five of the premier independent producer’s hard rock festivals in 2020 in a unique collaboration unprecedented for any American festival promoter or band. Recently named […]

WORDS BY SARA ALEXANDER AND PHOTOS BY ROBERT A. CHADWICK, GO VENUE MAGAZINE All are welcome in the Metallica family. There is no requirement necessary, but it does help if you’re a fuck up. -James […]