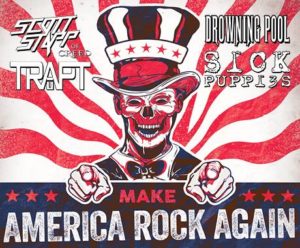 I have been to numerous high school and college basketball games at Ralston Arena, but never a concert, so the Make America Rock Again tour would break that mold. All the band I saw that night was my first time seeing them. Crowd wise, I think they could’ve had it at Sokol Auditorium, as it was kinda sparse, but that didn’t stop everyone from having a good time.

Trapt opened up the show. Lead singer Chris Taylor Brown stills sounds like the record. Very energetic. The band sounded tight. Their goal for their set was to have a good time. They performed the hits such as “Bring It”, “Echos”, and their signature hit, “Headstrong”. They had a strong sounding rhythm section of Brendan Hengle, drums, and Pete Charell, bass. David Sudock, guitarist, sounded really matched the sound on the albums. Overall, great start for the night.

Sick Puppies was up next. They are an Omaha favorite, with 89.7 the River taking them under their wing, having played places such as Sokol Auditorium, The Waiting Room, and festival slots at Westfair Amphitheater. I was blown away with their performance. They played such an electric set. I can see why they were an Omaha favorite because most of crowd was singing every lyric. I think Bryan Scott, singer/guitarist, is an excellent addition for this band, very charismatic and fun, as well as a talented musician. Also, I might have a crush on Emma Anzai, bassist, because she slapped that bass like no other. What a fun band to watch onstage!

Drowning Pool was the direct support for the night. They had so much energy on stage. Jasen Moreno, singer, was the Energizer bunny, reincarnated, moving all over the stage. What surprised me the most was their drummer, Mike Luce, doing most of the backing vocals. It’s not everyday you see a drummer doing backing vocals, so that was cool to hear. C.J. Pierce, guitarist, shredded like it was the early 2000s. Then, they played their signature hit, “Bodies”, and the place erupted. Everyone, if not, most knew every lyric. I believe their was two mosh pits going on at the same time. A burst of energy shot up when they played that song. What a way to end their set!

Finally, it was Scott Stapp of Creed’s turn to hit the stage. I was very surprised of the amount of energy he had. Having toured constantly with Creed and his solo project, you would think he would be burnt out, but no. He moved around like it was 2001 and Weathered just came out. Even his solo band also did justice by covering Creed’s songs perfectly, note for note. And what a voice. No deterioration at all. A true professional musician. Towards the end, he performed all the hits everyone knew and love such as “With Arms Wide Open”, “Higher”, “One Last Breath”, and ending the night with “My Sacrifice”. All the bands made, at least, Omaha rock with all their energetic, live performances that gives hope to the future of rock.