(Milan, Italy) – September 12, 2018 – 2018 marks the 20th anniversary of Lacuna Coil’s debut. To celebrate this special year, the band will be releasing “The 119 Show – Live In London” DVD. The special one-time live recording was filmed at the band’s exceptional show on January 19 in London at the O2 Forum Kentish Town and is scheduled for release November 9th, 2018. Lacuna Coil have just released a first look at the live show recording of “Blood, Tears, Dust” from “The 119 Show – Live In London”, which you can view below: 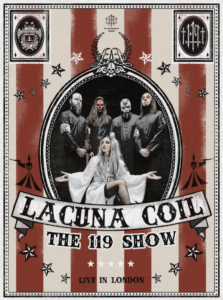 Lacuna Coil recently launched the trailer for “The 119 Show – Live In London, which can be viewed HERE. Fans will be able to view a very special career spanning set by the band, including songs never played live before. Topping it off, show features the UK circus group Incandescence. “The 119 Show – Live In London” is available in the following formats: 2CD/DVD, Blu-ray/DVD/2CD, Digital Album. Pre-orders are available HERE.

Additionally, Lacuna Coil will be having a special screening of “The 119 Show – Live In London” on October 23rd, offering the chance for fans to share the magic once again, this time on the big screen. Everyman Cinema will have exclusive showings at ‘Screen on the Green’, Islington, London. The showings will include a live Q&A with Cristina Scabbia and Andrea Ferro. The event is sponsored by Italian beermakers, Birra Moretti. Tickets are available HERE.

Following the release, the band is set to head out for a European tour to support the release of “The 119 Show -Live In London”. For more information on tour dates or to purchase tickets please visit the band’s website HERE.

Italian gothic metal superstars Lacuna Coil announce they will be joining Finnish multi-Platinum cello-rock band Apocalyptica on The Cell-0 Tour. The band will be direct support for the spring 2020 North American tour, which starts […]

Organizers of the UK’s Download festival have today confirmed that this year’s event has been canceled. It was due to take place at Castle Donington on June 12-14 with Iron Maiden, Kiss and System Of A Down set to headline. […]