The highly-anticipated new JOHN 5 and The Creatures album, Invasion, has been unleashed to the masses today! Invasion – produced and mixed by Barry Pointer at Riot House Studio – proves to be a diverse progression of the sound that JOHN 5 fans have grown to expect from the eclectic virtuoso.

In addition, JOHN 5 and The Creatures are scheduled to announce a new tour very soon, so stay tuned for more details!

Invasion, featuring the extraordinary new singles “Zoinks!”, “Crank It – Living With Ghosts”, “I Am John 5” and “Midnight Mass”, is available to order now in both physical and digital formats here: https://smarturl.it/invasionalbumj5

Today, in celebration of the release of Invasion, JOHN 5 and The Creatures have released yet another new single and music video, entitled “I Want It All”. Brought to life by the same team on “Crank It – Living With Ghosts” – director Israel Perez, art director Cody Varona and producer Nicole Hatley, with wardrobe by Forgotten Saints LA – the “I Want It All” video is a zany romp featuring some bodacious babes quite literally sustaining life via their Instagram feeds.

Watch the “I Want It All” video here: https://smarturl.it/invasionalbumj5

JOHN 5 says, “I’m super excited for this record to finally come out, for fans to see the new video, ‘I Want It All’, and to announce a new tour to follow in the fall very soon! I want to thank all of our fans for all of their support!”

Check out even more recent music videos/tracks by JOHN 5 and The Creatures here:

For more information about each video, visit www.john-5.com. 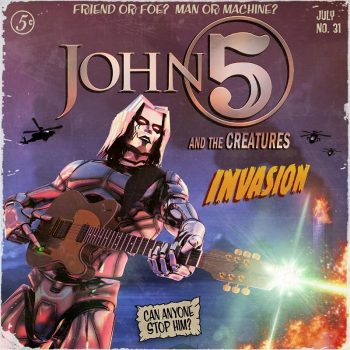 JOHN 5 and The Creatures are following up on this year’s live album release, It’s Alive!, with a brand new full-length studio album coming in 2019! The new album, entitled Invasion, will be teased on New Year’s Day 2019 by way […]