Cinepocalypse has terrorized Chicago audiences at the historic Music Box Theatre with an annual slate of premiere films, guests, and bloodcurdling entertainment. Tonight was no different as they were premiering Glenn Danzig‘s directorial debut film, VEROTIKA. 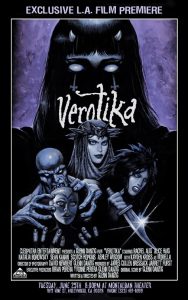 VEROTIKA is a set of stories published by Glenn Danzig‘s comic book company, Verotik. The movie is written and directed by Glenn Danzig, which makes this his directorial film debut. The three stories featured in this film are the Albino Spider of Dajette, Change of Face, and Drukija. Who else but Morella, one of Danzig‘s comic creations, to introduce each story in the movie. Plenty of blood and horror await you for this feature film. Glenn also has some new soundtrack music similar to Black Aria in the movie, which many fans will appreciate.

The Music Box Theater was SOLD OUT for this event. Before things got started, Glenn came up on stage and introduced the movie. He received a huge standing ovation from the crowd. It was a surreal experience to finally see VEROTIKA. Glenn definitely made this film very similar to his comics including how the scenes where shot. He did an excellent job at bringing his characters/stories come to life on the big screen. After the film was over, it was awesome to see Glenn Danzig answer questions from the Cinepocalypse founder, Josh Goldbloom. Glenn and everyone in the audience was in great spirits! About 45 minutes after the screening, Glenn left the building and came out to the front of the theater to meet with eager fans. There were a bunch of fans from the 7th House (Official DANZIG Fansite – www.7thHouse.com) in attendance who were excited to get to meet and talk with Glenn. What an honor and privilege it was to be part such a historic event.

The 2nd premiere of VEROTIKA will be next week in Los Angeles. It will take place on Tuesday, June 25th at the Montalban Theatre in Hollywood, California. Since this will be the LA premiere with the cast and crew, tickets will be very limited. Tickets for the Los Angeles premiere are available HERE.

Some photos from the VEROTIKA Chicago premiere below:

Los Angeles descends into Hollywood Babylon as the Original MISFITS is coming to the Banc Of California Stadium in Los Angeles on Saturday, June 29, 2019. Joining them for this special epic event will be […]

Riot Fest single-day lineups have been announced and Danzig returns to Riot Fest. Single-day and two-day tickets ON SALE FRIDAY at 10am CDT. And make sure to keep an eye out, the final two full-album […]