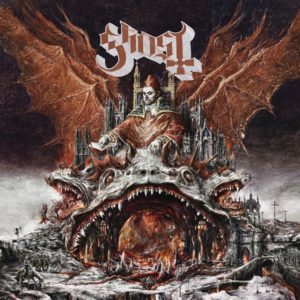 “Rats” is the lead single from Ghost’s new  album Prequelle that was released on June 1, 2018 (Loma Vista Records).  The album was loosely influenced by The Black Plague, the devastating pandemic that wiped out more than 20-million people across Europe in the 14th century, the disease being carried by rats.  However, as Ghost’s mastermind Tobias Forge recently told Revolver, “‘Rats’ is not technically about rodents.  It’s about something spreading as wildfire and completely destroying things quicker than you know.”

Ghost will hit the road this Fall for its “A Pale Tour Named Death” tour that commences October 25 in Dallas, Texas, and includes two headline arena shows, The Forum in Los Angeles on November 16, and New York City’s Barclays Center on December 15.  The complete itinerary is as follows:

A series of inspired encounters between creative forces from various worlds of sound and vision has resulted in “Hunter’s Moon,” the infectious first new track from GHOST since 2019’s Seven Inches Of Satanic Panic, and […]

LOS ANGELES, CA – Monday, September 24, 2018 — It is announced today that Grammy-winning, Swedish rock band Ghost will be Special Guest on all four European legs of Metallica’s 2019 “Worldwired” Stadium Tour that […]