The announcement of the legendary Mercyful Fate for the next Brutal Assault is still burning hot but here we are opening the second half of the list of performers.

Let’s start with ill-mannered crossover thrashers MUNICIPAL WASTE, who are venerating the state of the genre in the 80s. Get ready for fast tempo, short hits and a hefty dose of honest frantic thrashing rock and roll. We could say pretty much the same about the music of Billy Milan and his M.O.D. commando, with their attitude summed up in a credo “If it was a job, we would hate it!”. Make sure to come for the hits from the debut S.O.D. album and don’t forget to Speak English Or Die! We are staying in a party mode for another band, because we have no doubt that good times and beer waterfalls will be had when RED FANG will kick off their stoner-ish rock ‘n‘ roll clinic!

DARKEST HOUR, one of the acts that helped to revive American metal and was among the first in the metal-core fusion business will be also sharing our 25th anniversary, since they have been around since mid-90s playing all over the world, both small and big stages, making themselves comfortable everywhere. As far as symphonic metal goes, Brutal Assault is usually not the go-to festival, however FLESHGOD APOCALYPSE pushed the boundaries of extreme symphonic metal with their latest record Veleno again and thus belong on our stages, especially when considering their pure death metal roots.

EXHUMED too underwent a transition. Originally a goregrind squad, they kept their gore metal tell-tale signs, but eventually made grindcore-based death metal their bread and butter. And with death metal we’ll stay for a little longer. NECROT put on punkish old school, while SOREPTION engage in death metal‘s technical offshoot, staying incredibly rough and cold at the same time.

PENTAGRAM will certainly be the oldest band performing at the festival. Their origin dates back to the incredible year of 1971 and together with Saint Vitus and Trouble they are one of the original doom purveyors that evolved out of the sound of the Black Sabbath debut album. Danish black metal icons DENIAL OF GOD swear to the roots of the genre with their praise of Venom, Mercyful Fate, Bathory, Celtic Frost and others and belong among the well hidden gems of the underground despite their history of almost 30 years. The Swedish black metal vikings VALKYRJA also heavily utilize melodies as the band above, however their metal fury is anchored in a contemporary sound. 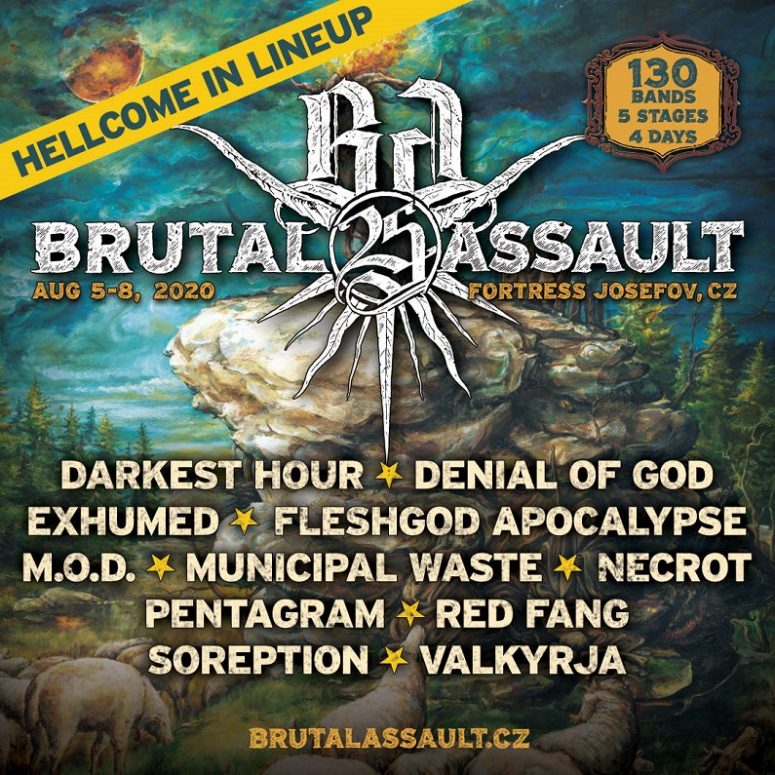 As Brutal Assault had to be inevitably postponed to 2021 lots of you have been curious about the line-up. With great pleasure we can announce that the vast majority of the original line-up (90 %) […]

Since it’s December, we thought that you all would appreciate some early Christmas gift. So we have these 12 bands for you. The first to be announced are the uncrowned kings of metalcore AS I LAY […]