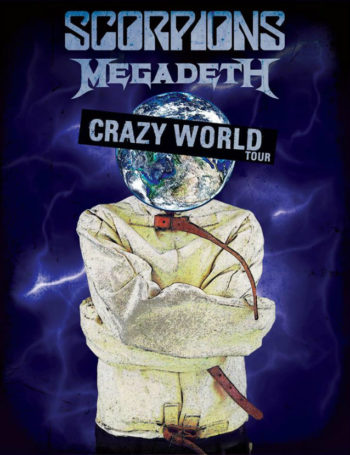 October 7th at The Forum in Inglewood, California got ready for Scorpions: Crazy World Tour with Megadeth as the opening act. Two legendary rock bands in their own way get together to bring what can only be described as musical phenomenon in the heavy metal rock world. Hundreds of fans dressed up for a night out to see their favorite bands. Many wore Scorpions shirts while others wore Megadeth the camaraderie between the fans was in good spirits. Some may say that Scorpions and Megadeth are too different to be put on stage together but it definitely worked!

At around 930pm the Scorpions Crazy World Tour curtain dropped and visual effect of a helicopter going through a city began to appear, the crowd cheered in excitement. When the helicopter idled at the top five shadowed figures jumped out of the helicopter, the lights got bright and Scorpions hit the stage with their 2015 hit Going Out With A Bang. Hearing Klaus Meine voice live for the second time in my life made me realize that by far he has one of the best preserved voices in rock ’n’ roll in my most humble opinion. Around the 4th song Klaus stopped and said “How are you doing tonight California?” the crowd cheered and drinks were raised, he continued to say “First of all let me say something, our hearts and prayers go out to Las Vegas to all the victims and their families. Tonight is about music, its about love and peace…. Las Vegas were with you tonight!” The crowd clapped and cheered, he continued onto introducing the next song The Zoo. At about an hour into the performance Scorpions did 3 acoustic songs one of them Send Me An Angel (1991). The lights dimmed down, a blue hue light pointed a giant disco ball creating a starry effect, as thousands of voices echoed from everywhere singing along, with their lighters and phone lights on lighting the entire dome swaying back and forth. They continued with Winds Of Change, one again thousands of voices harmonized together to sing along to these powerful lyrics of brother hood and camaraderie “Take me to the magic of the moment on a glory night, where the children of tomorrow dream away, in the wind of change”. Now for a bit of a mood change, Scorpions decided to pay tribute to the late legendary Lemmy Kilmister by performing Overkill from Motorhead. Drummer Mikkey Dee former member of Mototrhead (1992-2015) did a impeccable performance, by the looks of his face expression you could feel his excitement and his happiness preforming this song. Let me talk about Mr. Dee’s drum solo performance for a minute, there are no words to express how startlingly impressive it was, bravo! Mikkey Dee joined Scorpions in late 2016, grand addition to this renowned band. At 11pm it was time for the encore No One Like You followed by Still Loving You and ending the show with the classic Rock You Like A Hurricane. Nothing but respect and appreciation for the music these individuals share with us. The following day we learned that the rest of the 2017 Crazy World Tour was canceled due to Klaus Meine severe laryngitis, Go Venue would like to wish Klaus a speedy recovery and would like to thank Scorpions for an unforgettable night at The Forum in Los Angeles California.

Megadeth as an opening act was bold but at the same time it was a magnificent choice for the Crazy World Tour.

Megadeth opened the show at exactly 8pm, concert-goers where still getting drinks and buying merchandise. When the roars from the crowd got loud everyone rushed inside the dome. Some where head banging their way to their seats others were head banging in place raising their horns high. Dave Mustaine and the band where in great spirit, very positive and interacted great with the fans. The visual effect for every song were different, it almost felt like if we were watching a movie and the band was the commentary. The lighting for entire set also was very impressive, they dedicated a lot of effort into the visual part of the show and it paid off superbly. Visuals that stuck out for me where when Megadeth performed Symphony Of Destruction visuals of war, and protests and government elite laughing at the chaos that the world was going through, it felt so real and perfect for the times and events that actually occurring right now in America. Similar visuals were used for Peace Sells and the crowd was not disappointed, you can feel everyone around feeding of each others energy, head banging and rocking out with their fists up in the air singing “Peace sells, but whose buying? Peace sells but whose buying?!” very powerful and very significant. It was such a great night even Dave Mustaine joked about what he did the next day after receiving his Grammy, he said “I wondered what took so long? The next day I took the Grammy poured Vodka in it and drank it!” he paused and continued with a “Just Kidding, heres to Dystopia” and proceeded to perform Dystopia. Megadeth front man Dave Mustaine thanked the Scorpions for having them as a special guest for the tour and he thanked the fans for coming out, ending the show with masterpiece Holly Wars.

Incredible night with only a two bands, what more could metal fans have asked for, it was perfection.