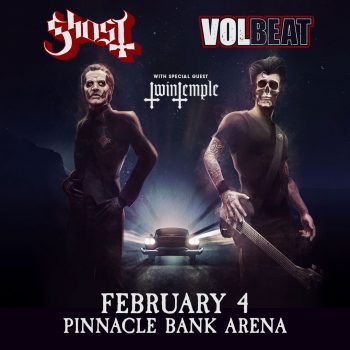 On February 4, Pinnacle Bank Arena in Lincoln, NE was invaded by two of the biggest rock bands in the world who just happen to be from Scandinavia in a co-headline, Ghost from Sweden and Volbeat from Denmark. It was a match made in hell and Nebraska was ready for it, especially being a Friday night.

Los Angeles’s own satanic doo-wop group, Twin Temple, opened the concert. I honestly didn’t know what I was going to expect from them. They were so much fun! The confidence and attitude they all had been very unique. Lead singer Alexandra James and her husband, guitarist Zachary James, had a showmanship and stage presence like no other. And they sounded great, featuring a backing band quartet featuring saxophone, piano, bass, and drums. You wouldn’t think they would fit into a show like this, but they were perfect for the bill.

Volbeat was the first of the co-headline. I have seen these guys a couple of times, so I’m familiar with their live show. That being said, I had a great time with them. I was surprised that they played six songs from their new album that came out a couple of months ago, Servant of the Mind, meaning they are truly proud of this album they made while in lockdown. And their video production was phenomenal, I thought I was watching a concert film. Lead singer and guitarist Michael Poulsen has this swagger to him that no one comes close to replicating, obviously other than Elvis and Johnny Cash. They played all the hits, which have earned them recently the most chart toppers on Billboard Mainstream Rock by a non-US act. Their hooks are catchy as hell and the riffs are heavy as ever. Volbeat was meant to play arenas, so it’s always a treat to see them live in this capacity.

Finally, it was Ghost’s turn to take the stage. Though I have seen them once before, the last time they came to Nebraska in 2018, I had a flat tire on the way to the concert and sadly, had to miss them. So, I was looking forward to this performance since it was announced they were coming back to Nebraska. And, man, colored my impressed. They upped the production budget, in the best way possible. Papa Emeritus IV, costume changes and all, knows how to entertain a crowd. I was so pleasantly surprised to see Ghost have backup singers, which is always a good look since most bands have backing vocal tracks. And the Nameless Ghouls’ masks look insanely good, very gas and steampunk-inspired. They do have quite the passionate fanbase, going crazy for them. They are in support of their upcoming album, Impera, which is set for release on March 11. Much like Volbeat, Ghost was meant to play arenas. They bring something so different to the table every time they put out a new album. Thank you to Pinnacle Bank Arena and 104-1 The Blaze for bringing these big rock shows to Lincoln in the early part of the year to celebrate The Blaze’s birthday.

The Blue Ridge Rock Festival will be returning to Virginia for its second run this September. With one of the largest lineups of any rock and metal festival in 2021, this year’s bill has been highly anticipated. They’ve […]

BY JOE DeSANTI | Go Venue Magazine If you’re a fan of laser lights, smoke, video screens, and Alternative Rock music, the Orpheum Theater in Omaha, Nebraska was the place to be on Tuesday night […]