REVIEW BY DAVID TAYLOR and PHOTOS BY ROBERT A CHADWICK 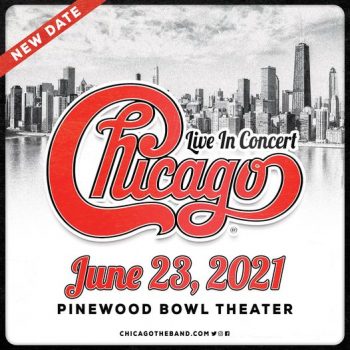 June 23, 2021, marked the return to the stage for Chicago in fifteen months, a band whose has been together through thick and thin for nearly sixty decades. Pinewood Bowl was the place to be in Lincoln, NE, as Chicago opened up their songbook.

They played through the hits, as well as some deep cuts. The MVPs of the night go to the horn section comprised of original member Lee Loughnane on trumpet, Ray Herrmann on saxophone, and Nick Lane, filling in for founding member James Pankow, on trombone. Those three guys had so much fun on stage. Their chemistry was electric. And the harmonies were tight. It was nice seeing founding member Robert Lamm playing singing and playing keyboards. Lamm and Loughnane may be in their 70s, but they are not slowing down musically. Song highlights include “You’re the Inspiration”, “Saturday in the Park”, and “Hard to Say I’m Sorry”. Other members I want to shout out include Keith Howland ripping it on guitar, very impressive finger-tapping on some tunes, Lou Pardini, on the soulful, lower register vocals, paying proper tribute to the late Terry Kath on songs like “Make Me Smile” and “I’m a Man”, as well as the keyboards. Another shout out goes to the rhythm section, comprised of drummer Walfredo Reyes Jr., percussionist Ramon Yslas (both of whom had a killer drum-solo trade-off during “I’m a Man”) and bassist Brett Simons. And lastly, big shout out to Neil Donell, singer on those higher register songs. Very colorful video screens were their backdrop for the night, composed of stock videos, an interesting choice. They ended the night with a fiery rendition of the band’s signature song, “25 or 6 to 4”. Pinewood Bowl was packed for a Wednesday night of live music. I’m glad to say live music is back for good. Thank you, Pinewood Bowl, for bringing Chicago to Nebraska.

BY DEAN BIRKHEIMER | Go Venue Magazine State Disco and Garst were at The Waiting Room  in Omaha, Nebraska along with a multitude of friends who were all there to party and congratulate The Real […]

CONCERT REVIEW: .38 Special with Autograph at the Ralston Arena in Omaha

“Rock was born in the South, so saying ‘Southern Rock’ is like saying ‘rock rock.’” – Duane Allman Thank you for dining with us, tonight’s “SPECIAL” ….. ROCK & ROLL The biting cold was no […]