To mark the fourth outing of the Blue Ridge Rock Festival, PURPOSE DRIVEN EVENTS has amassed a line-up of 180+ bands for the September 9–12 event at Blue Ridge Amphitheater, a long-awaited large-scale concert venue in Southwest Virginia. The excitement for the event is already building in the media and from the line-up:

“This is the best lineup I’ve ever seen since Woodstock 99.” — Rock Feed 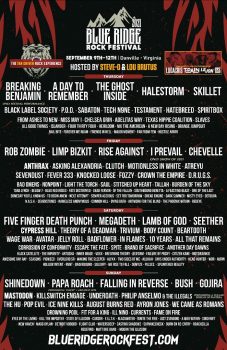 The 2021 line-up includes headliners Five Finger Death Punch, Rob Zombie, Shinedown, Breaking Benjamin, Limp Bizkit and more than 180 bands who will appear on six stages over four days. The weekend-long event will also include additional onsite activities and activations. Special features include Club Experience–a first-ever, one-of-a-kind soundproofed club at a rock festival. Headliners for this special club include headliner Ludacris, T-Pain, and Lil Jon. Also on tap: the Hellzapoppin Circus Sideshow Revue, a vaudeville freak show of wonder by Hellzapoppin’s Ringleader and Producer, Mr. Bryce “The Govna” Graves. In addition, excitingly, the festival will be hosted by Steve-O: delivering stunts, comedy, and emcee duties for the first time ever at a rock festival; and special guest Lou Brutus.

Tickets for BLUE RIDGE ROCK FESTIVAL start at just $65 with single day, weekend passes are available from $165 and single-day parking is priced at $20. Other amenities include on site camping (RV or car), hotel and tickets packages, onsite parking and locker rentals. Military and first responder discounts are also available. Additional details including all ticketing info can be found here. Follow-on social media Facebook, Instagram and Twitter.

“What is taking place with Blue Ridge Rock Festival this year is truly humbling, and very special,” says PURPOSE DRIVEN EVENTS’ Chief Executive Officer JONATHAN SLYE. “The entire event is centered around a mission that resonates in a profound way with the fans. We are working around the clock to constantly innovate, listen to our fans, and fight for our passionate community. The rapid, organic growth of Blue Ridge from 3,500 attendees on our first weekend, to an already near sell-out of 150,000 this year is a true testament to that.”

MAHA Festival Is Back With a One-Day, Reduced-Capacity Event

Maha Festival 2021 will take place on one day, Saturday, July 31 from 2 p.m. to midnight. While recent Mahas have included other elements, like pop-ups and conference-style events, this summer will be fully outdoors. […]