“You don’t want to kick my butt; my butt is as rotten as yours. What you want are butts that settled on thrones of justice” -Mojo Jojo- 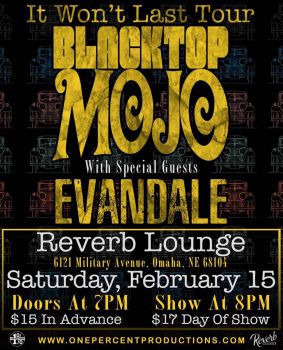 An unyielding confidence in what you’re undertaking and a merciless work ethic can get you far in life. Don’t believe it’s true? Well, don’t tell that to the Texas henchmen of Blacktop Mojo. It’s pretty much what they preach on their website and on stage. These chaps recognize the meaning of the expression, you reap what you sow. They work hard and the product they produce reflects it.

Before we get to Blacktop Mojo, how bout we kick things off with a boom with some Evandale.

I remember the precise moment I became not just a fan of Evandale, but an admirer. It was January 16th, 2019. Pop Evil was headlining at the Bourbon in Lincoln and by winning a contest in which bands had to provide Pop Evil with their version of Be Legendary, Evandale was selected to open the show. Before the first song concluded, I was hooked. Back then they were a five-piece band, now they boast four exceedingly gifted artists. Ryan Lang on Drums, Cody Du on Bass/Vocals, Chad Riche – Guitar/Vocals and E.J. Petry – Lead Vocals. Even though they are hard rock, they do provide an essence of Southern Rock that fills nicely in your ears. It’s that Southern Rock styling that made them the perfect opener for Blacktop Mojo. From the first song Burn the City, the three-part harmonies are in play. Hard-hitting Hatchett style riffs echoed through-out the room. Later we get Black Heart Southern Queen which is a textbook combination of Crüe and Blackfoot. E.J. got to shine during Where You Belong, as this song requires powerful vocals and an ability to sustain. The bands have been very busy lately, touring, recording and such, and E.J. may have had a very, very, VERY!! slight issue, but all it did was add some texture and some dirt.  It really was astonishing. The band had so much fun on the stage and was so eager to make sure everybody was also having fun.  It all came together during Manipulator, their last offering. Justin King was invited on stage and he shared his absurd guitar playing talent with us. If you’re not familiar with Justin, just peek at his Facebook page and revel in his list of accomplishments.  With everything that was going on, I have to say watching Chad with the pinky slide was stellar. For me, it was the moment of the set. Listen, Evandale is an Omaha band, they perform in the area all the time. They really are a must-see band. You really have no excuses. They do Omaha proud and they are winners of the Omaha Entertainment and Arts Award – 2018 Best New Artist. Lastly, GO SEE THIS BAND – THEY KILL!!

SET LIST:
BURN THE CITY | GHOST OF YOU | BLACK HEART SOUTHERN QUEEN | THE ROAD | AWAY FROM YOU | PARACHUTE | WHERE YOU BELONG | MANIPULATOR

Before the show, I’m hanging out with a fellow photographer and we are in the showroom with the VIP’s and in walk Blacktop Mojo. They shake our hands, welcome us to the show and begin to mingle. Matt James, vocals – Nathan Gillis, drums – Ryan Kiefer, Lead Guitar – Chuck Wepfer, Guitar and Matt Curtis, bass are Blacktop Mojo and they are some real down to earth fellas. After awhile Matt comes over and we are chatting a bit about the band and he tells us that their sound can be described as Southern Grunge. You absolutely get a 90s rock sound from them. (thank you Pixies) and somehow, at the same time, The Outlaws wash over you. Matt‘s vocal soar right into and through guitar riffs. Rapid-fire bottom from the bass ensures we all keep moving. Blacktop Mojo are captivating on stage. Although it was a small area for a band to play, they made the most of it. Especially Matt.  I’ve never seen so many Santana faces from a bass player in my life.  It was hard to know who to watch. As soon as you’re focused on Matt, then Ryan does something you gotta see, and as you’re watching him, Chuck draws your attention. It was crazy how busy these guys were on stage.  After belting us with four hard-hitting songs, they slow it down with a two-person acoustic version of Phil Collins’, In the Air Tonight. It was mesmerizing, to say the least.  It was time to get things going again and what better way than All Mine Now.  This song was played with the sole purpose of having us all bang our heads. It did its job. During It Won’t Last, we get to just close our eyes and enjoy some blues. The guitar work on this song is sexy, raunchy and beautiful. It is a work of art. Blacktop Mojo is a band who has risen quickly and will continue to rise. They simply cannot help becoming a future influence on the up and coming musicians and bands.  I desperately want to see these guys again, on a bigger stage. One can only imagine the damage they can do.

Dream Theater Celebrates 20 Years of Metropolis Pt. 2 at the Orpheum

REVIEW BY DAVID TAYLOR AND PHOTOS BY ROBERT A CHADWICK | Go Venue Magazine Mondays are usually just the worst. You go to work after a nice weekend doing whatever, as it begins the long […]

WORDS BY DAVID TAYLOR AND PHOTOS BY ROBERT A CHADWICK | Go Venue Magazine It was October 10, 2019 and spooky season was in full swing. The Slowdown in downtown Omaha, Nebraska was the place to be […]