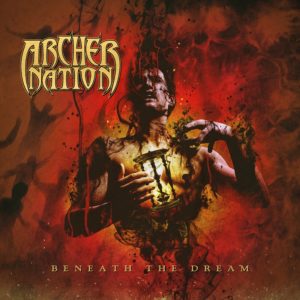 The band’s 2015 METALVILLE debut Culling The Weak, also produced and mixed by Clink, (legendary producer of Guns N Roses classics Appetite for Destruction, Use your Illusion 1&2, and Megadeth’s Rust In Peace) brought Archer Nation worldwide attention, having already toured extensively in over 20 countries, and performed alongside some of the genre’s biggest acts including; Hellyeah, Annihilator, Doro, and Queensryche, as well as an appearance on the 2016 MONSTERS OF ROCK cruise.

Archer Nation, bringing new meaning to the phrase “power trio” with the incendiary lineup of guitarist/vocalist Dylan Rose, bassist David DeSilva, and Drummer Keyhan Moini, are determined to deliver genuine and unrelenting hard rock and heavy metal music to fans everywhere. Keyhan’s unique and ferocious drumming, David’s masterful bass duties, and Dylan’s captivating blend of shredding and powerhouse vocals make for an exciting modern take on the genre, while paying homage to all the inspirations that came before them.

Says Vocalist/Guitarist Dylan Rose, “After working together to create Culling The Weak, everyone was excited to get back in the studio with Mike for the second record. We’re very pleased with the result and can’t wait to release Beneath The Dream with the great team at EMP Label Group, so we can get back to non-stop touring in 2019!”

Adds EMP’s David Ellefson, “When Mike Clink first turned myself and Thom onto the Archer Nation record, we were blown away. Clink is a true World-Class producer, and we’re honored to work with him and Archer Nation to release their ferocious new album in 2019!”

Internationally acclaimed, Grammy nominated rock five-piece, STONE SOUR are set to release their first official live album, ‘Hello, You Bastards: Live In Reno’ on December 13th via Cooking Vinyl. The release features 16 of the band’s most loved tracks, including Absolute […]

AVATAR has shared their latest single “God of Sick Dreams” with an accompanying visualizer from their highly anticipated full-length, Hunter Gatherer, due out August 7th, 2020 via Entertainment One (eOne). The track finds the band with no shortage of […]