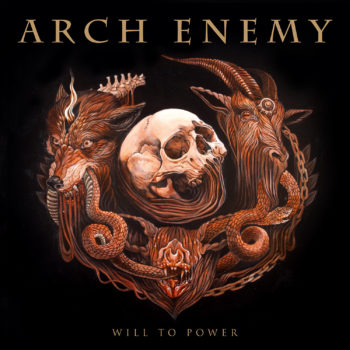 Arch Enemy‘s “Will To Power” their 10th studio album, out September 8th 2017 via Century Media Records is a compelling album, in my opinion the title does it justice. This melodic death metal band shows us more of what some may consider a bit more dark and defiant through their lyrics. I got the sense that most of the songs in this album are songs of positive motivation, protest and the search for liberty. “Will To Power” also had great melodies and good riffs as always Arch Enemy delivered memorable aspects for each of their songs. Some of Arch Enemy older albums where a bit more “hard” but in this specific album you can definitely hear that the band tried to be a little more melodic, combined with Alissa’s beastly growls it really made it all come together. One of the songs that really stood out on this album was The World Is Yours [watch video below] lyrically speaking this song gave me the feeling of standing up to the unjust system and taking back what is rightfully ours which would be our liberty and freedom. A perfect song for a revolution! Musically speaking it really caught my attention, it gave me a bit of DragonForce vibes and that’s not a bad thing at all, I actually really enjoyed it, it was also bit more of classic Melo-death with some real heavy metal thrown into the mix and Arch Enemy made it work! Alissa White-Gluz shows us a bit more of her marvelous clean vocals in Reason To Believe which exhibits a more serene and purer side of this powerhouse scream-machine vocalist.

Was this album entertaining? Sure it was! In almost every song I could picture myself going into some kind of battle weather it was a personal life experience and me coming out being the victor! Or simply the fact of fantasizing of over throwing the government for their bullshit excuses of the way they run things and how they still try to oppress us. Keyboards were also a great asset to this album, in the track Dreams Of Retribution the keys and soothing guitar gave me a “Classical” feel to it which I very much enjoyed. Over all every song was epic in my most humble opinion. I also want to quickly mention the albums art work, I was very intrigued by the captivating design from Alex Reisfar. I believe its safe to say that these amazing musicians know exactly what to give an audience, with great expertise from shredders Amott and Jeff Loomis what can go wrong? Not to mention this is Alissa’s only second album with Arch Enemy she does and outstanding job and really puts herself out there as a strong front female performer, I cannot wait to see what Arch Enemy has planned for the future.

Will To Power Tracklist:
Set Flame to the Night
The Race
Blood in the Water
The World Is Yours
The Eagle Flies Alone
Reason to Believe
Murder Scene
First Day in Hell
Saturnine
Dreams of Retribution
My Shadow and I
A Fight I Must Win
City Baby Attacked by Rats (cover version)

ARCH ENEMY will hit the road next week as they kick-off their international “Will To Power Tour” starting with a headlining jaunt across Eastern Europe with special guests Jinjer before making their way overseas for a co-headlining North American tour with Trivium, featuring support from While She Sleeps and Fit For An Autopsy in October. The band will continue touring into the new year with a January trek back in Europe with support from Wintersun, Tribulation, and Jinjer. Full dates can be found listed below.

Tickets for all shows are available here: www.archenemy.net.

WORDS BY GREGG BAMBULE and PHOTOS BY ROBERT A. CHADWICK | Go Venue Magazine October 31, 2018 – What’s a more appropriate way to spend a typical chilly Halloween night in the Chicago area than […]

JESS BECK | Go Venue Magazine Formed in 2006, the proggy, Swedish rock band Horisont is back with another stylistic album under their belt. Signed under worldwide label Century Media, their new project “Sudden Death” […]