Prepare for the Invasion of John 5 and the Creatures in their explosive new album that shreds, taps and riffs into the soul and relentlessly beckons you want more!

It is difficult to being to discuss the album without recognition of the abridged history and pedigree of John 5.  First picking up a guitar at the age of seven, the album gives the impression that he has never put it down since and to an extent; this is true.  The range of collaborations and back history for John 5 is nothing less than awe-inspiring.  He has worked with the likes of ‘David Lee Roth‘, ‘Marilyn Manson‘, ‘Rob Zombie‘, ‘Paul Stanley‘ ‘(KISS)’, ‘Alice Cooper‘ and ‘Lynard Skynard‘ to name a few artists he has supported over successive decades.  The solo albums began to emerge in 2004 and this has led to a catalogue of increasingly tangible outputs, and with ‘Invasion’ the foothold is rigidly placed. 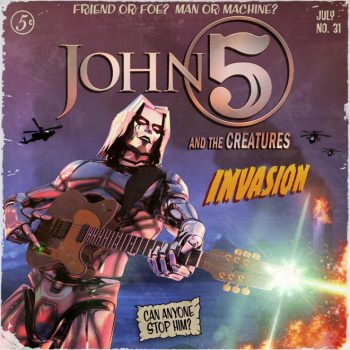 As the album has no real lyrical content, a parallel can be drawn to the showcase work of the evergreen journeyman musician that we have seen undertaken by ‘Travis Barker‘, to traverse across musical boundaries and genres.  John 5 has similarly rotated through decades of weathering as a musician, riding through the genre-developing storm to see the return of the guitarist as a clear feature of the hard rock staple.  The movement in hard rock has seen a grunge to alt-metal and metalcore prominence move the sectional elements of a standard hard rock track into a blended mass during the 90’s and 00’s and it is these shifts in music have been seen to shadow the ‘Steve Vai‘, ‘Yngwie Malmsteen‘, ‘Eddie Van Halen‘ talents towards the end of the 80’s. As the progressive hard rock scene diverged into the need for a collective band thunder over lightening guitar moments the horizon sees some return to hail the guitarist with adaptation of course as the centerpiece of the constructed hard rock roots that created such solid musicianship and melody that grips, rather than darkens the musical soul.

The nexus of the album is the guitar, and the use of styles and flavors to indicate the eclectic study base that has created John 5’s ability is astounding.   The technical ability can be heard by a novice to expert ear, the pace and texture remains smooth and the effect and amplification is that of a master at work.  It is no mistake that the varying styles are supported so well by both bass and drums too, ‘Logan Miles Nix‘ drops to a country feel, funk and sporadic jazz fills to weave the underground of each track as necessary, again showcasing the talent of the musicianship in the band.  ‘Ian Ross‘ gives the basslines groove and threads each sequence perfectly and uses effect subtly and yet in equity with the rest of the track.

This is a tour de force in solo musicianship and the over-noise has been stripped back so that the rawness and truth of each riff, chords and use of effect can be heard and defined.

The album, released on the 60 Cycle Hum Records was produced and mixed by Barry Pointer at Riot House Studios and sees the added post production effects are likely to be aligned to Pointer’s work on movies he has worked on. This functions to add mood through effect in prominent moments on the album.  These inserts through the production process that slide everything from industrial samples to dance track beats are not superficial or clumsy, the assignment of each of these lifts is dropped in at just the right moment to add to the aesthetic and almost offer a few moments of uncertainty, that within seconds somehow works as the guitar compliments anything that is thrown at it – an invasion if you will!

The album artwork is a throwback to 1950’s sci-fi movie or comic book which is in keeping to the album and with no real lyrical depth apart from the sparse use of track title in a digitized way to represent a robotic feel.  The guitar work is absolutely on point, digitally correct and robotically harnessed as the allegory of the thematic that draw the album together.  At 35 minutes for 10 tracks, it could be argued that it is short as a release, but the album feels longer due to the complexity of each track and gives good value for money.

John 5 and the creatures have a string of new tour dates and you can keep up to date via their website for more information on where to catch them. https://john-5.com/main/tour/

The title track and opening short ‘Invasion’ offers a hard rock introduction to the album that steps into ‘I Am John 5’.  The repetitive digital vocal is sliced with the mid-section shreds and industrial synth that somehow works as the bass is applied to offer ride loops that are similar to the ‘Chemical Brothers‘ ‘Hey Boy Hey Girl‘ before the effortless guitar work merges with sampled screams of a 1950’s movie invasion movie give the impression that the community is running in fear.

‘Midnight Mass’ and the murderously fast drum beat and double bass pedaling from Nix with complimentary hyper-shredding is an ultimate showcase of the validation of John 5’s guitar ability. The tone and stability inside the track and the use of sub-scales across octaves to demonstrate the developing riffs are beautiful and for anyone who has attempted this for just a few seconds will know that what is being played sounds easy and is almost impossible to replicate.

‘Crank It – Living with Ghosts’ is a bounce track and is relatively a dance track and will be an audience favorite, i can already hear the “Crank It Motherfucker” screams from crowds at the gigs.  The track effortlessly descends with a perfectly stepped drum pace change into an eery horror movie feel and once again the juxtaposition that should not work, just does and the track opens up into a narrative of the teen party gone wrong in every slasher flick from the 80’s. This is impressive artistry and includes touches of NWOBHM riffs to conclude the ministry of horror that the track embodies.

‘Zoinks!’ A funktastic jam that would not be out of place on an album of it’s own theme, the tapping sequence is amazing and hits the spot. The Scooby Doo oddness works without it feeling a low key entry on the album. The album could and does contain anything and everything, the musicianship and talent is stable enough to carry anything off and it does.  The extended video release with Scooby Doo style animated short with Nikki Sixx cameo is testament to the ability of the musician to compliment any genre.

‘Howdy’ a country-esque yet speedy scale driven masterpiece, the early roots of John 5 and the finger-picking style he grew up with is exploited in this purposeful crescendo and allegro driven track.  The vocal overlay at intervals is the crowd pleaser as this can be chanted by audiences at the pinnacle of the chorus section.

“I want it all” prog-techno-punk track uses a series of riffs that are symptomatic of the blended step forwards in prog punk, the old school flavor in a contemporary synthesized vocal, lyrically there is not much to it, the basis of the track is to emphasize the solo artistry on the guitar, telecaster delta blues funnels riff after riff and the digitization of the track opens a doorway to a modernist hard rock that will follow by a next gen of artists. The technical playing above the nut feature is stunning and is more than just a twee addition, this dynamic takes the artistry out of the hands of the amateur musician and claims that this is musicianship for the grown ups!

‘Cactus Flower’ opens with a sample from the ‘Brian De Palma‘ movie of ‘Stephen King’s‘ ‘Carrie‘ and is the softer more melodic track on the album.  The delivery and staged complexity as the track moves forwards could be missed if you are not listening. The technical harmonics in the final stages are placed so well with incredible timing that there are body shaking moments that reach out and touch.

‘Constant Sorrow’ closes the album with a bluesy pentatonic scaled outro with shades of melancholy through the opening and closing harmonics which are stunning to observe. As an ending to the album, it fades as the invasion is complete.

This album is for the guitar fanatic and the music press police will be stopped and arrested at the balance of instrumentation, amplification and ability that this album represents.  With throwbacks to an old school that never died and a new school that has yet to be formed, this is an astonishing piece of work as an album and should be in every rockers collection. The album is the portal to a shift in the hard rock stable that will become a cornerstone over the next decade once next gen artist such as ‘Yungblud‘ for instance who could potentially manage to place a vocal and lyrics over the top that fits the contemporary take on classic guitar techniques.

The guitar work on the album has an intentional feel of improvisation, the concept of the album has been sourced on the guitar and has been elevated with digital synth, samples and additional flavors in production with exceptional bass and drums to bridge many styles.  There is nothing samey about the tracks, each has been individually produced and brought to the table honestly, there has been no need to replicate a sound, the band can reach into the pot and draw out what they want, this is liberated hard rock.

The future starts here and John 5 and the Creatures have started the Invasion in the industry that will move the hard rock arena onwards and upwards.

‘INVASION’ – The Brand New Album from John 5 And The Creatures out now digital/streaming!

Punk not dead Barb Wire Dolls are a labeled as a grunge Punk rock band originated in Greece in 2010. They played many times in Greece until KROQ radio host Rodney Bingenheimer noticed them and […]

45 Years Ago: The Album That Kept KISS Alive!

Chance Barkley | Go Venue Magazine In 1975, Kiss was in trouble. After a slow start with their self-titled album, the follow-ups Hotter than Hell and Dressed to Kill, had done progressively worse in the […]