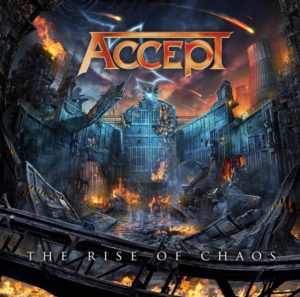 How do you review something like Accept’s 15th album The Rise of Chaos?  What do you compare it to?  Their last 3 releases with their current vocalist?  Their classic output from the 80’s?  It’s a bit of a dilemma for this reviewer.  Hardcore fans (such as myself) may be familiar with those recent albums, but let’s face it, the general metal fan is not.  They know Accept from their 80’s output like Balls to the Wall and Metal Heart.

So… if you’re a hardcore Accept fan… I would still say this is their weakest outing of the Tornillo era.  The last three albums- Blood of the Nations, Stalingrad and Blind Rage are excellent bordering on incredible LPs- especially for a band this far into their career and with a back catalog as storied as Accept’s.  I personally think they stand proudly next to the band’s classic 80’s work and are of comparable quality.

The Rise of Chaos sounds great- it was made by the same production team as the previous 3 albums.  But the material feels lacking and lackluster by comparison.  Let’s put it this way- I don’t expect any tracks from The Rise of Chaos to linger in Accept’s live sets past the upcoming tour.  There is just nothing here that justifies taking Teutonic Terror (from 2010’s Blood of the Nations) out of the set, let alone something like the immortal London Leather Boys (from 1983’s Balls to the Wall).

It’s a good album, a solid effort, a standing double, a B.  If you already have all of Accept’s output you may well enjoy this outing, although I don’t expect it will take up a long residency in your CD player or iPod.  If you haven’t heard Accept since the glory days of the 80’s pick up any of the last 3 albums before you pick up this one and you will bang your head like a teenager again.