“If you walk across my camera, I will flash the world your story.” ~Woody Guthrie

Before we get into Dropkick Murphys‘ actual performance, how about a few words for the two really amazing opening acts.

Jesse Ahern is the sort of fella who takes nothing for granted. His deep appreciation for being able to stand in front of a crowd and sing his words to them is clearly evident. With his harmonica and guitar, Jesse opened the show, and right off the bat conveyed with charm and humor, various tales about his life and experiences. An incredibly down to earth fellow, he definitely has the ability to raise his voice without making compromises.  He will speak his mind and stands up for himself. This was made clear to us when he announced he had one more song and asked us to enjoy it, he then added, “not like the two MFers who just got up and walked away.” His set was only 30 minutes, but it was a brilliant 30 minutes. A perfect opener. His distinctive voice and musical styling gave off a real Irish pub vibe. No matter what type of venue he shows up in the Omaha area, I will be there, and I urge all of you to be there too. Check out his page here https://www.jesseahern.com/. Also check out his latest release Heartache and Love, which was recorded during quarantine at Zippah Studios and produced by Brian Charles.

Taking the stage next was emerging star and “Queer Queen of Outlaw Country, Jaime Wyatt. Not everyone who claims to be an outlaw has the resume to back it up, but Jaime sure does. During her battle with drug addiction, Jaime spent time in the L.A. County jail for robbing her own heroin dealer. There was a time in her life where, in her own words, she knew she has “got to be a person, and gotta be okay with who she is on this Earth, or she’s not going to stick around.” She is a throwback to the days of the honky tonk and is a 50s Country fashionista. Country music has always been thought of as a genre where stories are told, and the ones Jaime tells are tales she’s lived. It was in 2020 when she released Neon Cross, which was produced by Shooter Jennings. This album is about loss, sobriety and courage.  Loss of a father, overcoming an addiction, and coming out as gay. Her show is simple and to the point, but maintains a huge amount of entertainment. There is no doubt Jaime Wyatt will very soon be headlining her own shows. To get to know more about Jaime and her music, please head to her web page by using this link. https://www.jaimewyatt.com/. 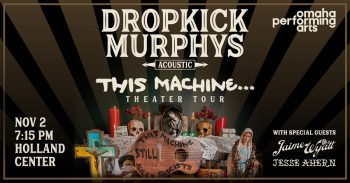 Dropkick Murphys new release, This Machine Still Kills Fascists, was released on September 30 and has some never publicly released lyrics from Mr. Guthrie. Dropkick Murphys member Ken Casey was quoted as saying, “This project has been a long time in the making. Nora Guthrie thought her father would’ve got a kick out of us, would’ve liked us, that we were somewhat kindred spirit. Again, according to Casey, Woody is the “original punk.”  “He went against the grain, he fought the good fight, he spoke up and sang about his beliefs.  Dropkick Murphys and Woody Guthrie were a perfect match, as Dropkick has always sung songs aimed at the working class and that is exactly how Woody approached songwriting. Despite the lack of amps, there was no lack of punk. The fellas were all on fire and Ken was utilizing every square inch of the stage. The reserved seating crowd were on their feet the entire time and went completely ballistic during “Upside Down Middle Finger” when Ken screamed for them to show him the finger. During the performance, both opening acts joined the band on stage for what were some spectacular moments. Of course, no Dropkick Murphys show is complete unless “Rose Tattoo” and “Shipping Up to Boston” are played. The set list was perfection and included two encores. Nobody went home unsatisfied.

Lastly, a quick thank you to the Holland. Everyone there was professional, courteous and helpful. A great venue with great people and literally not a bad seat in the house.

BY DEAN BIRKHEIMER | Go Venue Magazine “Guitar is for the head, drums are for the chest, but bass gets you in the groin” -Suzi Quatro- Every show needs a warm-up, but instead of a simple […]

REVIEW BY DAVID TAYLOR and PHOTOS BY ROBERT A CHADWICK June 23, 2021, marked the return to the stage for Chicago in fifteen months, a band whose has been together through thick and thin for […]