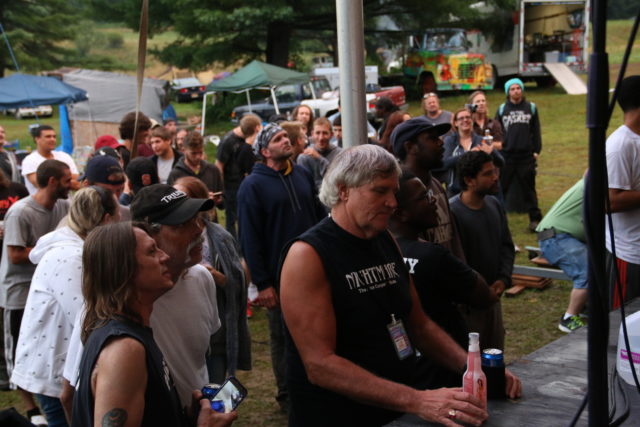 Having listened to my own advice from Nikstock Pt 1, I found myself sitting in my favorite lawn chair strategically placed by the opening of my recently set up tent…relaxing with one of my cigars and lukewarm coffee from home, on this glorious morning in the foothills of Edgewood Mountain.  I was finally able to put aside most of life’s constant chaos and revel in the natural settings of what would become a memorable weekend by far.  Anticipating seeing my old friends from yesteryear as well as some new and continually growing friendships from previous festival, my mind wandered and all of a sudden it all became clear, – Nikstock wasn’t simply about the music.  It is so much more, but you’ll have to wait for me to summarize these two final days of what I refer to in terms as being the high point of my year…except the birth of my grandson on the morning of the 13th, of course.  So, without further hesitation, I bring you my long awaited review of Nikstock 2017!

After checking in with Brian for my morning coffee and quick pit stop backstage to coordinate day one’s band line-ups, cancellations and last minute add-ons, as Cookbag (www.cookbagmusic.com) based out of Boston, Massachusetts promptly set up their equipment and plugged into soundboard.  Beginning day one, band members Jeremy Burton (guitar), Noah Whiteside (bass) and drummer Dan Hoffman wasted no time in pounding the crowd amassing around the stage, with jaw dropping versions of their melodic punk/rock genre.  Coming to the table with a dozen originals including “Emo Song”, “Paradise”, “Whiskey Teeth”, and of course their last number “Insomnia Insecurity”.  These New England boys from Boston were just what was needed to kick off the day.  Next up on the split stage and set to go with a slower alternative metal sound as they began with “A Little Bit Far Away”, followed by “Monkey I’m Yr Man”, was Sindicate. 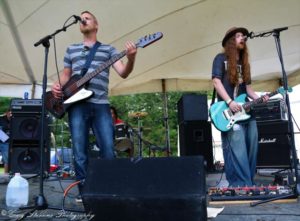 Originating from Hartford, Connecticut and formed in early 1999 (as Drowned Youth) and reformed as Sindicate in 2013, Bernie Simpson got everyone’s attention as he kicked his bass drum with his pedal several times leading the band into their well unified nine song setlist.  Charles Gillette (vox/guitar) and bassist Gordon Dart played off of each other like seasoned professionals as Gillette‘s young son Caleb Gillette (road crew) stood back and watched with awe, as Sindicate wrapped up with their closer “Scorpion & The Frog”.  For more information, visit The Sindicate.

Anxiously waiting grabbing his decorative microphone stand, James Hatter Jr. had to patiently wait, as our host for the weekend was now front and center stage.  It’s now that I have the humble pleasure of introducing the lovely and multi-talented Ivonna Cadaver (Natalie), host of www.macabretheater.com and in the minds of many…the new Elvira. Ivonna graced us many times with her presence during the weekend , introducing bands, motivating the crowds, and in general inspiring all who attended with her over-the-top personality and wit.  Now back to the somewhat antsy antics of Hatter, as Dead The Rising from Syracuse, New York hit the stage hard, as guitarists Anthony C. Magari Jr. and 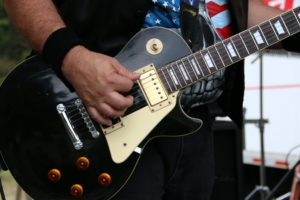 Edward Mattiaccio cranked up their amps and tore into an elaborate 16 song set, beginning with “Hard To Handle” (Black Crowes cover), a few Stone Temple Pilot hits, “Cumbersome” (7 Mary 3 cover) – which I might add was certainly the crowd pleaser, as Hatter teased and titillated the females in the audience.  Not wanting to leave out the two madmen behind both the drum kit as well as the axe, I’m obligated (lol) to present not only the intense kit poundings of Tony Perolla accompanied by the merciless mastering of bassist Sid Willie.  Watching these two artists feed off of each other as they synchronize their beats for the other three to follow, one can’t help but think that both Perolla and Willie came…and conquered with true conviction.  All in all, these CNY guys are genuinely a blast to witness and certainly love to play up to the photographer…especially Magari as he attacks his blood red Marshall-induced guitar.  Finalizing the set with “Fight For Your Right” (Beastie Boys cover) Hatter outdid himself vocally unlike previous gigs, quite similar to that of a seasoned rock star.

Back again after putting on a stellar performance in June, Cash Montana, the brainchild behind Syracuse’s latest hip-hop/rap phenomenon 315CA$H, grabbed the mic and near-full bottle of Hennessy, took a healthy swig and together with Bigman and 23Filmz these lads laid down some serious digital beats as they bounded back and forth, beling out originals such as “Rep My City”, and “What I Will Do’.  Managed by none other than Montana‘s father Chris Tanaskoski (Pops), whom I had the ultimate pleasure of meeting and conversing with, this energetic and electrifying young man will definitely make it to the top of his genre, I have no doubt.  To continue your journey following 315CA$H, the following links were provided:  YouTube – 315CA$H or on instagram – @thereal315CA$H. 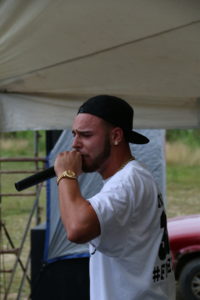 Hot on the heals of 315CA$H was the Elmira, NY band Krungeld, fronted by none other than Bill Krungeld (Bill Gutierrez) on vocals and bass guitar.  Besides being outstanding musicians in their thrash/deathcore genre, these guys have to be one of the coolest bunch of cats to just  hand out with…especially Tony Mergendahl (drum kit) after hours during the rave (lol).  But when on stage, Mergendahl is all business while beating the heads off his kit keeping Ben Kolowski in check as he shredded away on his all black six-string guitar while Krungeld belted out their opener “Sour Naddle Niddle” which in itself was made for head-banging, but ended abruptly when the soundman accidentally unplugged Krungeld‘s axe mid-song. Not letting a simple glitch hinder them, Krungeld ripped into more originals such as “Heart Stomper” and “Megaman” (an improv death metal song), before closing with “Chogs” and my favorite “Street Fighter Blues”.  If you haven’t already, I suggest you check this band out pronto… they truly are worth your time! 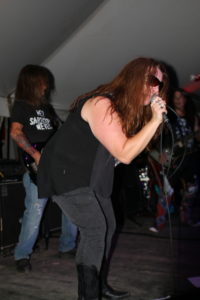 Jamie Arney quickly gathered his band members shortly after, as another CNY band took the stage, as once again our lovely host Ivonna Cadaver introduced Str8on, a classic rock cover band focusing primarily on Heart originals, Pat Benetar and Blondie.  Opening with their well orchestrated song “Str8on” (Heart cover), both Al (still no last name lol) and Patrick Giddings on guitars stepped up to the plate, just like the professionals musicians emit in national acts, while the exquisite vocals of Michelle Tartanglia soothed our souls during their rendition of “Call Me” (Blondie cover) and most certainly closing their set with Heart’s “Barracuda”.  Nick Pollastro proved he was up for the challenge as he pounded away on his skins virtually expressionless, as Arney entertained us not only on his axe, but with his signature comical antics – a genuine basketcase!  Oh wait…there’s more of Jamie Arney as Breaking the Law (Judas Priest cover band) took over the stage following Str8on.  Comprised of Arney on bass and both Anthony C. Mangari Jr. (Dead The Rising) and Billy Hatch on lead guitars, Thad Makowski (vox) and my friend Mike Merrifield on the drum kit (who’s played for Joey Belladonna (Anthrax) years past…and displayed it majestically.  Coming to the table with a sinister set of 10 songs beginning with “Electric Eye” and “Heading Out To The Highway”, once they got through half their set with “Breaking The Law”, there was absolutely no questioning that this set would be epic…and the boys didn’t disappoint!  Wrapping up with “You’ve Got Another Thing Coming” and closing number “Hellbent For Leather”, Breaking The Law literally slayed the masses in submission!

Filling these shoes would be difficult at best for the last act for the day…but Nick Fouco and his boys of Tempter did just that, along with Mike Merrifield laying down his style of drum beats with excellence…for a guy who was given only one day to rehearse!  This was going to be one hell of a set, with the likes of Metallica, Rob Zombie, Godsmack, and of course the Prince of Darkness’s Black Sabbath covers.  Starting out this onslaught of hard-driving/fist-pumping 18 song set with “For Whom the Bell Tolls” (Metallica cover) it was already obvious that no one attending was going to either sit or stand idly by, as Fouco raced back and forth across the stage, tantalizing those in the front row with explosive vocals and a professionalism fit for someone of his accredations and longevity.  Collaborating with Fouco was the effortless riffs of Al on leader guitars, as Derek slapped his axe strings in one of my all-time favorites “Thunder Kiss” (R2 cover) and the Door’s “Road House Blues” with the help of an occasional slug from his Bud Light.  Al did exceptional on all three of Godsmack’s covers ” Keep Away”, “Bad Religion” and lastly “Awake”, with my highest ratings for his powerful shredding of “Bad Religion”…Tony Rombola would be proud!  Ending this night of metal mania, Tempter closed with “Fight For Your Right” (Beastie Boy’s cover), and final number “Rock and Roll All Night”, as the fog began to roll in and many of the fans, friends and family joined Fouco and Tempter in a sing-a-long that never wanted to end…but sadly had too. 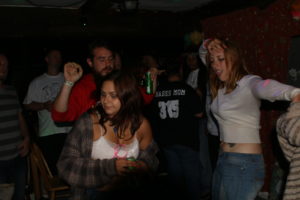 With the stage lights dimmed and stage hands breaking down/covering equipment for the night, the party was only just beginning at the entrance to this venue as Insomnia hosted an indoor rave within the walls of the ledge.  With a massive campfire just outside the right exit door and dozens of weary attendees warmed themselves, the digital sounds and multitude of bright colorful lights of this year’s rave bounced off the faces of those brave enough to bring forth their techno dance moves. Being this was my first rave ever, I must confess…I was totally captivated by this experience and look forward to next year’s. Well folks, there’s only a few hours of darkness left, so it’s off to my tent to call it a day…or night.  Looking back on today’s line-up, as well as just having an awesome kind of day, I’ll sleep well!

VANS WARPED TOUR :: ALL THINGS MUST COME TO AN END

“I have been a very lucky person to have traveled across the country and sometimes around the world as one of the founders and producers of the Vans Warped Tour. Today, with many mixed feelings, […]