The Dusk in Us Tour
Opening Acts: GIVE and Pile

When I saw those two words on the Baltimore Soundstage’s Facebook page concerning tonight’s show, I knew what kind of night I would be in for.  I also made a mental note to get my brand new camera insured.  This was going to be brutal. 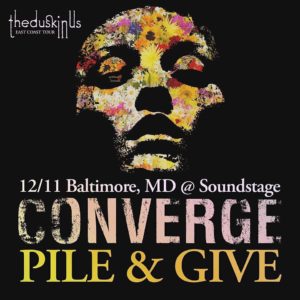 Although, I’ve never had the pleasure of seeing Converge before, the ferocious energy of their live show is no secret in the metal community.  They certainly lived up to their reputation tonight.  More on that in a bit.

First up on Monday night’s set was local hardcore band, GIVE.

Although the crowd was relatively sparse at this point in the night, these guys were awesome about engaging them.  They definitely had a few loyal fans out there singing lyrics to songs they hadn’t even released yet.  They had an amazing presence on stage and I completely understand how they ended up on this high-energy bill.

Check out their Bandcamp page HERE.

On direct support was Pile.  Hailing from the Boston area like tonight’s headliners, Pile wasted no time showing Baltimore why they have such a fiercely loyal fanbase in the Northeast.   No doubt they made some new fans tonight, myself included. I’ve been listening to them nonstop since the show.  Their live performance and sound really blew me away. Do yourself a favor: Give these guys a listen and catch them live if you can!

…And here we go.  After setting up their own gear, which surprised me a bit considering these guys are giants in the metalcore genre, three of the four members of Converge took the stage.  Guitarist Kurt Ballou started plucking away with the sleepy, opening notes of “Reptilian”, a new track off of their latest release The Dusk in Us (which was recorded and mixed by Ballou at the illustrious Godcity  Recording Studio).  When the band’s frontman, Jacob Bannon emerged, my attention was immediately drawn to his frenetic energy.  As he was racing from one side of the stage to the other, I claimed my spot right in front of bassist, Nate Newton (Old Man Gloom, Cavalera Conspiracy and others) and I had to fight to stay there for the show’s duration. Once ultimate road warrior, Benjamin Koller (All Pigs Must Die, Mutoid Man, Killer be Killed) started pounding on the drums, the crowd collectively lost their minds and began shoving forward to get as close to the madness as possible.   It didn’t take long for the circle pit to form and it only briefly slowed down during the title track of their new album.  It was after “The Dusk in Us” that fans started rushing the stage to dive into the crowd.  The band was completely unfazed by this and seemed to thrive on the undeniable pulsing energy in the room. Bannon frequently offered his mic to fans throughout the boisterous set and they were happy to oblige him with their own attempts at his barking, growling vocals.   After a chaotic performance of “Eagles Become Vultures”, the band left the stage briefly before giving us an encore.  The night was closed out with Last Light which is found on their 2004 release, You Fail Me.

Check out the setlist below and be sure to buy their new album and treat yourself to their (always) awesome merchandise: https://www.convergecult.com/

SET LIST:
Reptilian | Under Duress | Arkhipov Calm | A Single Tear | Dark Horse | Broken Vow | Aimless Arrow | Black Cloud | The Dusk in Us | Eye of the Quarrel | Broken by Light | Empty on the Inside | Trigger | I Can Tell You About Pain | Eagles Become Vultures | Last Light

CONCERT REVIEW: The Number Twelve Looks Like You at Ottobar in Baltimore

The Number Twelve Looks Like You Nuclear. Sad. Nuclear Anniversary Tour Ottobar in Baltimore, Maryland Opening Acts: Cryptodira Rolo Tomassi Cryptodira was the first band to hit the stage tonight and I am so glad […]