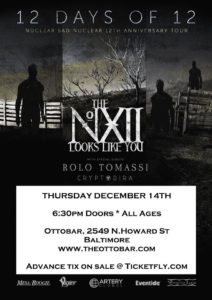 Cryptodira was the first band to hit the stage tonight and I am so glad to have finally caught these guys live. They’ve been on my radar for a few years as they have been really making waves in the the New York City metal scene. They released their album, The Devil’s Despair in mid-November and were also recently named one of Revolver Magazine’s 5 Artists You Need to Know Now.  I’m glad these guys are starting to get some serious recognition and they certainly made some new fans at the show tonight. Get your hands on their new album and merchandise HERE.

Joining the bill all the way from the UK, Rolo Tomassi offered direct support. Although they’ve been around since 2005, this is the first time the quintet has toured the United States. They had quite a few loyal fans in the venue tonight. Their lively performance and astoundingly eclectic sound are bound to make an impression. They were, without a doubt, a perfect fit for this bill. I’m looking forward to seeing what the future holds for these guys (and gal). Pre-Order their new record HERE.

The Number Twelve Looks Like You played through their album, Nuclear. Sad. Nuclear. in its entirety to celebrate its 12th anniversary. The mathcore quartet from Bergen County, New Jersey (the old stomping grounds of yours truly), brought an incredibly loud, enthusiastic and tireless energy to the stage that clearly transferred to the crowd. Mention of some upcoming new music got us all pretty hyped up, too. Here’s to a new release in 2018 because I already have to see these guys again! Check them out HERE!

The Dusk in Us Tour Opening Acts: GIVE and Pile NO BARRICADE.  When I saw those two words on the Baltimore Soundstage’s Facebook page concerning tonight’s show, I knew what kind of night I would be […]